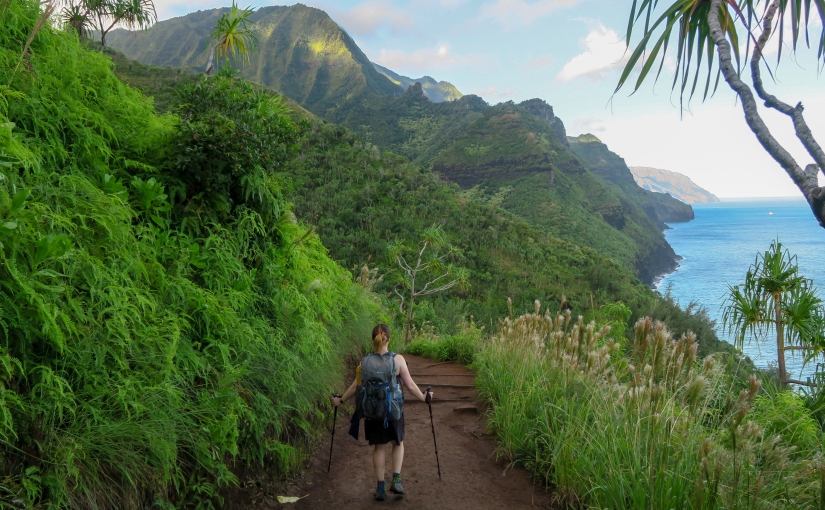 The first time we tried hiking the famous Kalalau Trail it didn’t happen.  It was 2012, and having woken before sunrise to get a parking spot at the trailhead, a string of yellow police ‘warning’ tape – the kind you see in CSI –  completely sealed off the trail.  How can a trail in sunny Hawaii be closed?  While loitering around trying to figure this out a ranger arrived.  His explanation seemed even more bizarre.  Apparently a ‘fugitive’ was on the run, having pushed a tourist from the cliffs the day before.  I shuddered at the horror of it, but still couldn’t help feeling utterly disappointed.  The trail would remain closed for the foreseeable future.  Hike aborted, we left to cheer ourselves up with a cooked breakfast.

We had travelled a long way to hike the trail.  Stretching 11-miles along the breath-taking Na Pail coastline of Northern Kauai, the Kalalau Trail regularly features in lists of the worlds ‘greatest’ hikes.  The reason for it’s fame is simple – the scenery is sublime.  A certain degree of ‘exclusivity’ also adds to its allure, with land access to the fluted coastline only possible by foot.  The trail promises to transport hikers into landscape preserving the very essence of Aloha.   Carving a path along towering Pali – sea cliffs – high above the turquoise ocean, it traverses 5 lush valleys, crossing streams and passing waterfalls, to reach a secluded beach. 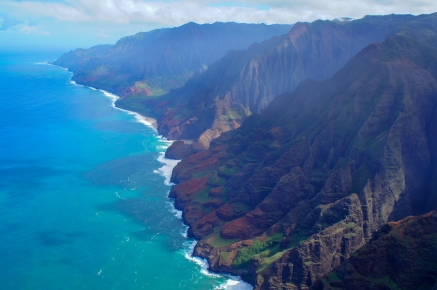 Na Pali coastline from the air

Using the excuse of needing R&R after our PCT hike, we returned to Kauai 4 years later.  With our camping gear in tow, and considering ourselves now super fit, we couldn’t pass up the opportunity to attempt the hike once more.  On setting out we even half-wondered whether we might complete the entire out-and-back hike in a single day…

It’s 6:30am and we’re ready.  Parking space secured at the now familiar Ke’e Beach trailhead, I’m feeling eager to clock off some miles before the sun heats up.  We join the trail passing multiple signs warning of potential dangers, such as flash flooding.  The initial climb along a cobbled path is significantly slowed due to thick, slippery mud following overnight rain. 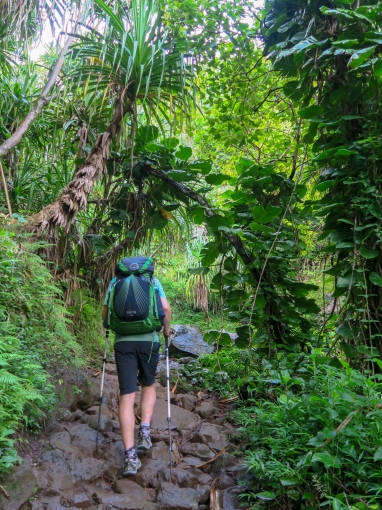 The first couple of miles form a popular day hike.  As such we are regularly overtaken by people not heaving huge backpacks, and some remarkably wearing flip-flops.  I try not to let that bother me, instead stealing glimpses of distant coastal views whenever the thick foliage allows.  At Hanakapai’ai, most people either turn around after visiting the small cove beach, or take a 2-mile trail inland to view the falls.  We continue, crossing the stream by hopping over rocks, fortunate that the water is low.  Apparently some people haven’t been so lucky, with danger signs warning of deaths caused by flash flooding and strong currents.  There is a key message: don’t go near the water if levels are high. 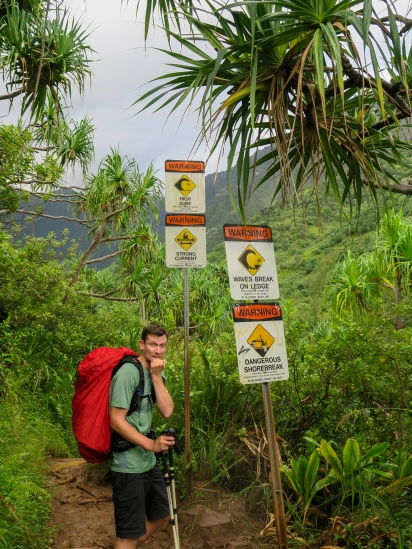 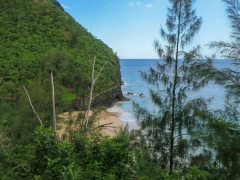 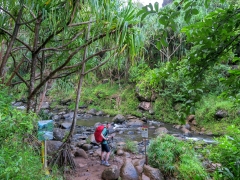 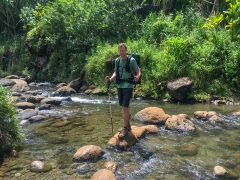 Once past Hanakapai’ai the trail instantly feels remote.  Our miles slow down even further, travelling along narrow switchbacks that climb 800 feet through dense tropical vegetation.  We find ourselves sweating buckets in the humid conditions.  The views are not as expansive, but bright colours of vivid green flora and fauna, contrast against the red clay soil.  I also notice the strong smell of sweet fruit.  We see wild guavas and passionfruit, many of which lay rotting on the ground.  The trail doesn’t level out.  We climb up and down into deep, narrow valleys, until 4 miles later we reach the forth valley: Hanakoa. 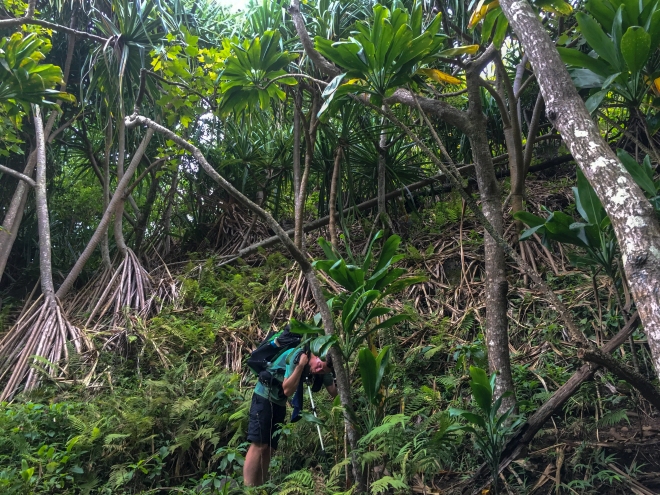 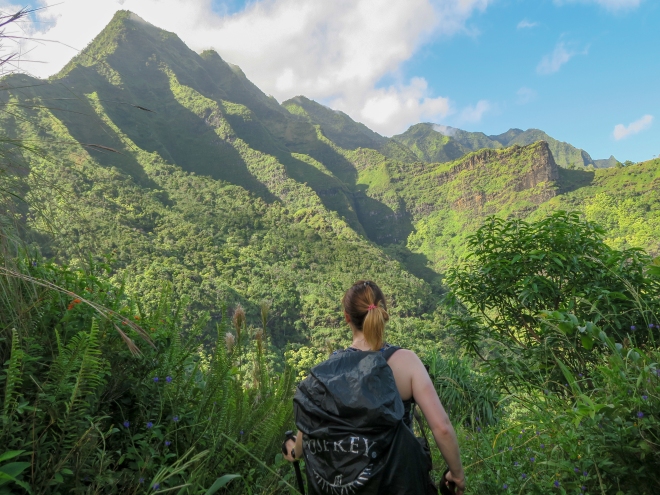 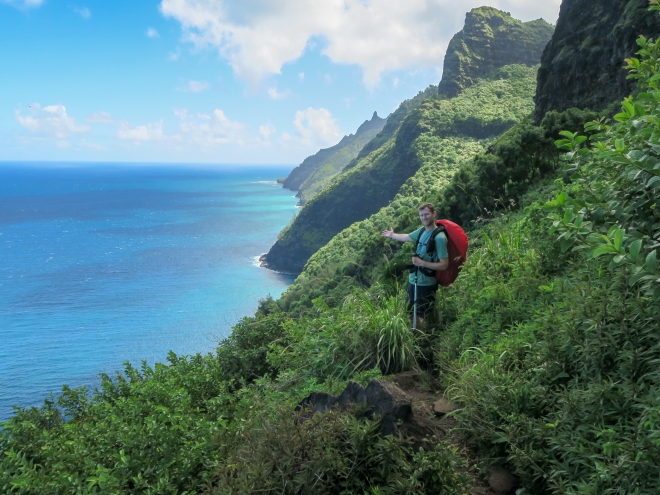 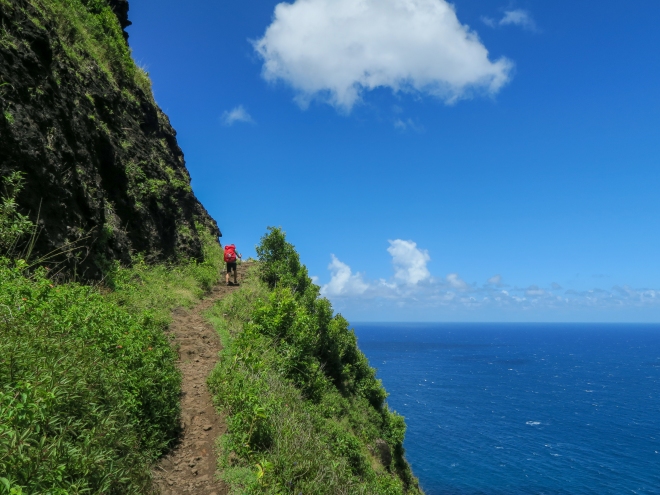 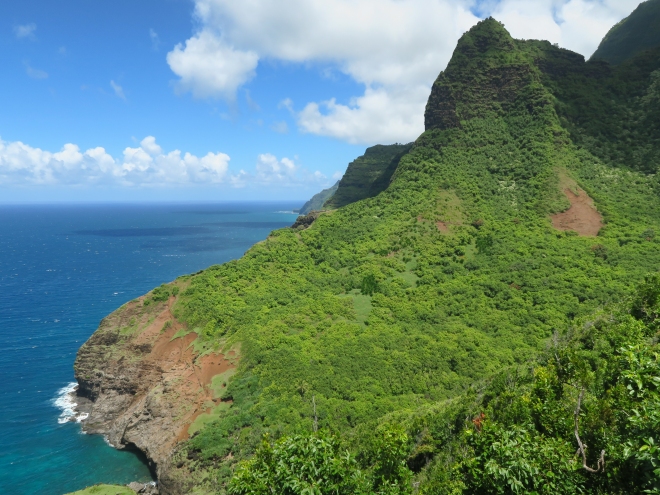 Hanokoa is the first of just 2 permitted campsites.  It’s rustic.  Spread over old agricultural terraces, the site contains two sheltered picnic tables, a compositing toilet cubical, and an emergency helicopter landing pad.  Seeing the grassy helipad I can’t help but hope we keep it together.  Sadly the camp has no beach access as it’s located on top of a hanging valley on the edge of a stream.  We long for a break at this point, but a small group of hunters – complete with scary-looking crossbows – seem to have taken over the camp.  Most likely out hunting wild boar (at least I hope that’s what they’re doing), we smile but they don’t reciprocate.  In fact I get pretty negative vibes from them, so feeling a bit vulnerable in such isolation we swiftly move on. 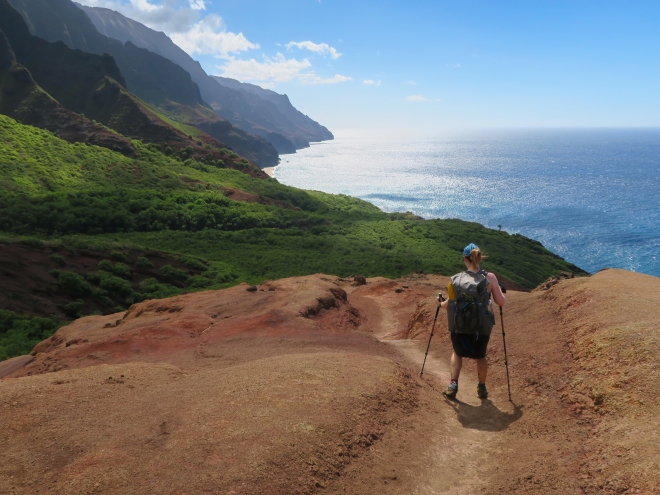 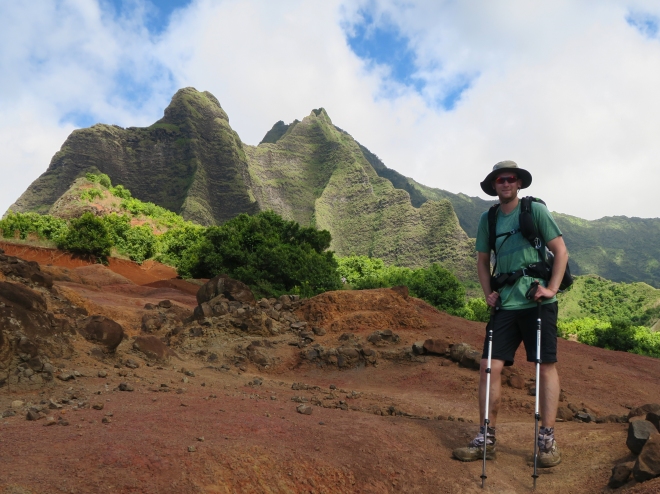 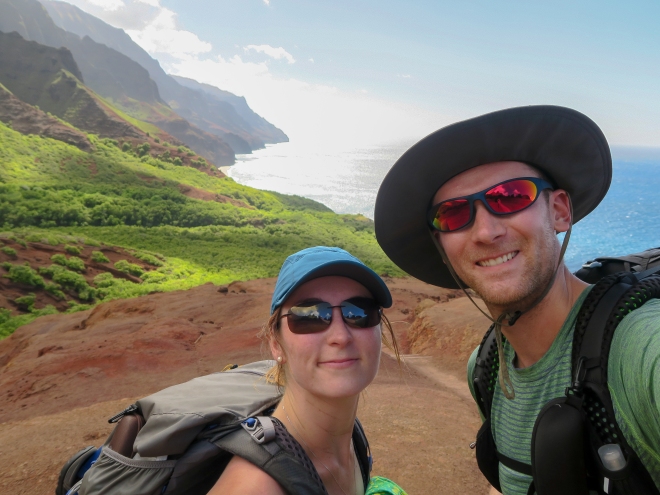 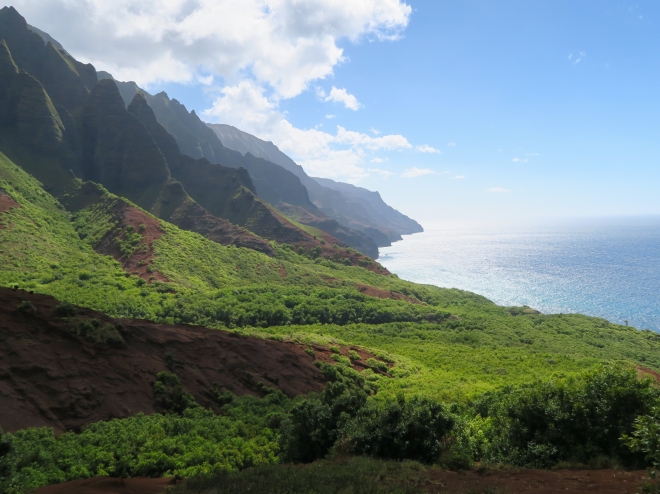 The next 5 miles are more exposed, offering little shade from the midday sun.  On exiting the valley onto drier terrain, panoramic views of cliffs rippling along the sparkling ocean appear.  The views are everything.  I keep stopping to take it all in, fearing I’ll slip on the vertigo-inducing trail if I lose my focus.  This is not a hike for the faint-hearted.  Erosion between miles 7 and 8 are perhaps the sketchiest, with crumbling drop-offs such as those at Crawler’s Ledge definitely requiring concentration, nerve and single-file traffic. 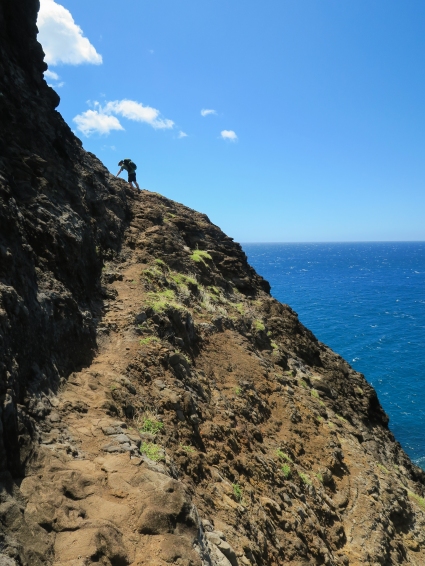 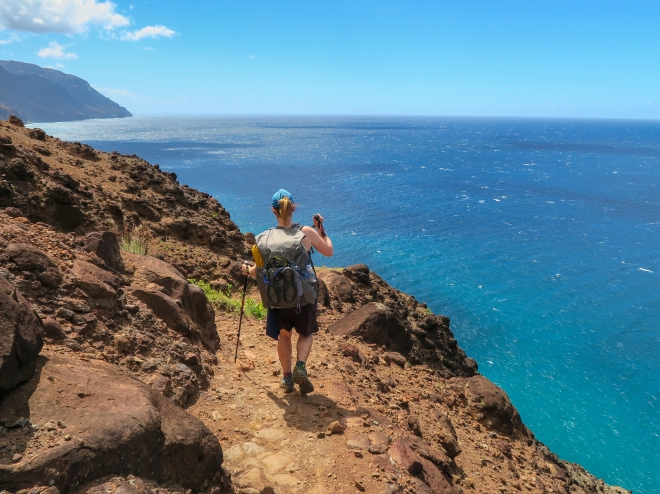 The trail begins to ease up on us for the final 2 miles as we lose elevation heading towards sea-level.  Reaching the Kalalau Valley, we ford the fast-running stream, and spot ruins of early Hawaiian settlements hidden amongst the trees. 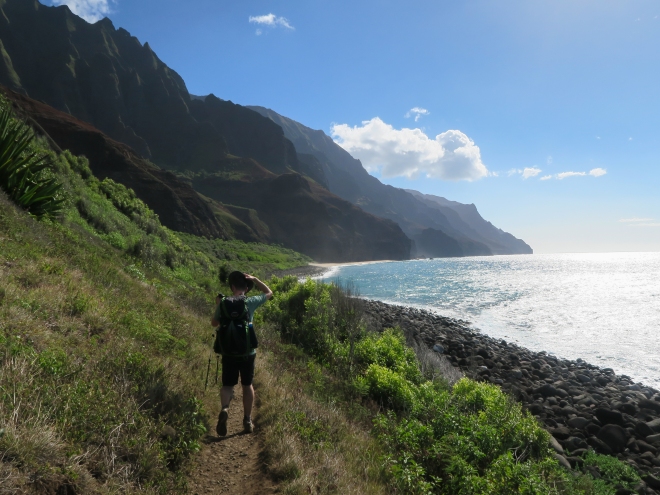 The sight of tents dotted underneath a shaded grove, provides sign that we’ve made it.  Just a few minutes further and a long, deep beach of fine white sand appears.  We watch as the cool sea invitingly laps against the shore.  But first things first – we need to establish camp.  Somehow – and I have no idea how – the last 11 miles have taken us 9 hours, with minimal breaks.  We feel exhilarated to have finally made our destination, but ridiculously tired.  It’s been hard work!  On closer inspection, the premium camping spots – those located just behind the beach with a degree of shelter from the wind – are already taken.  We haven’t seen many fellow hikers during the day, so it’s surprising to see around 30 people.  Perhaps they’re on a multi-night break, or it’s possible they arrived by [prohibited] boats.  We check out the waterfall nestled in the steep valley walls, but are too lazy to walk all the way to the end of the beach to investigate a series of caves.  We finish the day with a dip in the sea, where we’re rewarded by a beautiful rainbow right before a dramatic Hawaiian sunset. 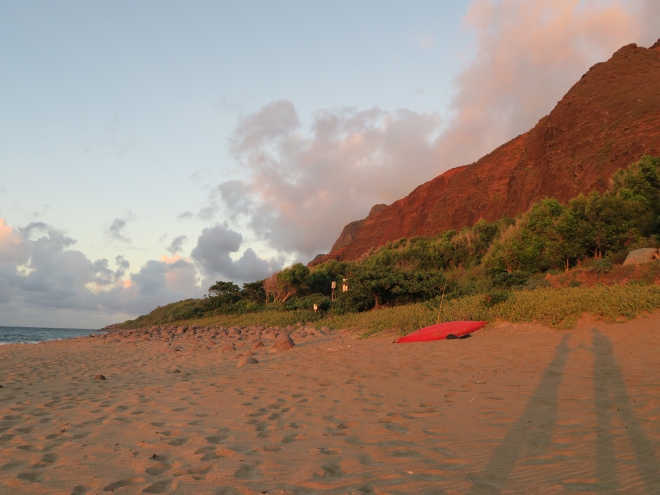 We pack up camp and make the return hike early the next morning.  We make slightly better time because it keeps raining on us.  The warm, tropical showers mean the camera comes out far less frequently, and the air is thick with humidity.  By the time we reach Hanakapai’ai, many people are enjoying the beach and in the sea, despite warning signs of hazardous rip currents.  Once again, we share the trail from that point.  Just after lunchtime we emerge at the trailhead, exhausted and covered in mud.  We hose off the worst of it at Ke’e beach showers, attracting strange looks from the beachgoers.  I am so happy to finally fall into the car seat.  I’m not going to lie – the hike was TOUGH!  Much tougher than we had anticipated, but WOW. 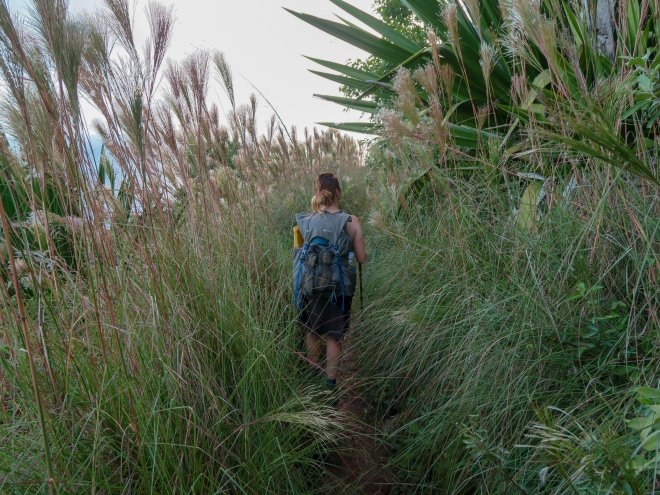 I’d love to return to the trial.  But if I were to do it again, I would plan on spending at least an extra night to enjoy a rest day on Kalalau beach.  That would offer the opportunity to explore further the Kalalau Valley, and maybe even hike the spur trail to Hanakapai’ai falls.  I would not recommend attempting to do the 22-mile round trip in a single day – who would even dream of such a crazy thing 🙂  As always, the pictures don’t go anywhere near capturing the stunning views. Hawaii, and Kauai in particular continues to capture my heart. 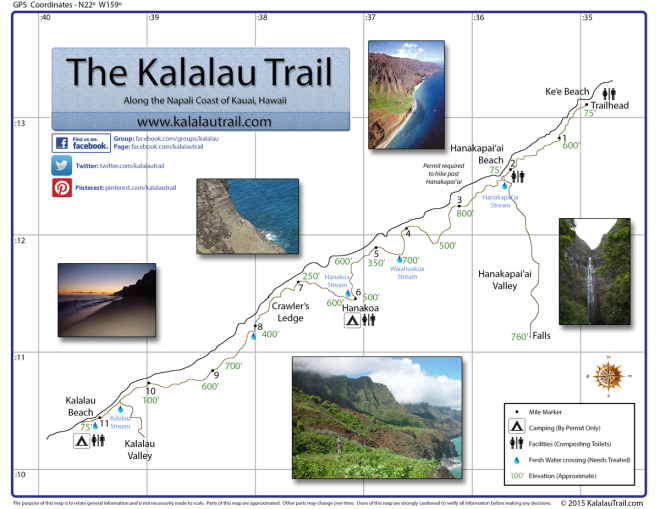 Permits are required to hike past Hanakapai’ai.  They are limited in numbers, and cost us 20 USD per person.  Apparently they sellout months in advance, so book here.

Water: There is no tapped water along the trail, but plenty of opportunities to fill up from fresh streams.  It’s recommended that you treat it though, so pack a filter or purification tablets.  We used the Sawyer Squeeze.

When to go: The trail is most advisable during summer (May-October), due to less predictable winter weather.  It doesn’t rule out a winter hike, but check weather forecasts before you set out – spontaneous, heavy rainfall can be dangerous, with its ability to turn streams into raging rivers within minutes.

What to bring: I recommend using hiking poles for stability on the uneven terrain. Also pack: bug spray; waterproofs (at least to keep your gear dry); shelter (tent or hammock); hat (for sun protection); water filter; head torch (if you want to see at night).