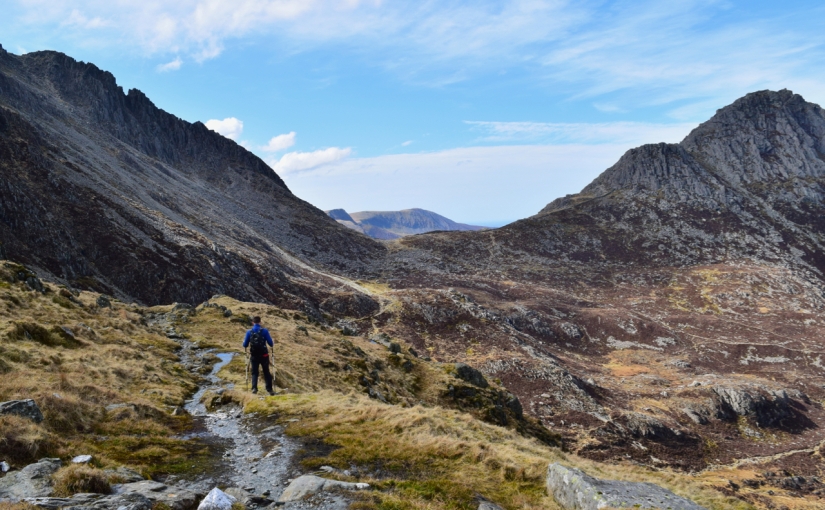 Last week Conrad and I shattered a personal record.  Having made it across the border to Wales for the first time ever – yes we only live in London – we somehow managed to take a ridiculous 7 hours to complete a 6-mile walk.  I use the word ‘walk’ loosely here.  What followed involved some seriously sketchy scrabbling as our hiking poles got stowed away to grip onto wet rocks for dear life.  Please don’t make me another tragic face on the news following a failed mountain rescue attempt I prayed.  On the plus side, the views were exceptional.

Snowdonia National Park lies in the northwestern region of Wales and contains the tallest peak in England and Wales – Snowdon.  Snowdon is the attention-grabbing icon of the Welsh peaks.  The fact it draws so many crowds probably has something to do with the train you can ride all the way to the top!  For our first jaunt in Wales, we selected a tamer ‘warm-up’ hike before attempting Snowdon and headed to the Ogwen Valley.  The guidebook rated the loop of Cwm Bochlwyd and Glyder Fach as: ‘strenuous with some scrambling’.  With hindsight, this may not have been the most sensible pick for easing ourselves in. 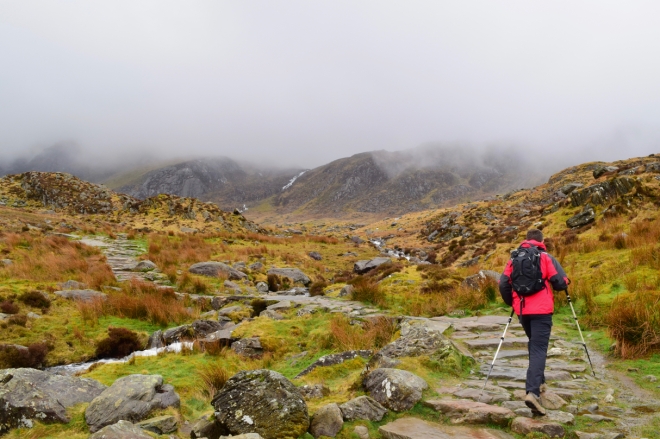 It’s pelting down sideways as we peel ourselves out of the warm car, having sat inside for at least 20 minutes watching waterproof-clad hikers disappear into the mist.  The weather forecast has betrayed us.  We grab coats and reluctantly take the trail leading from Ogwen Cottage up into the valley.  With hoods partially covering our faces, we cleverly manage to miss our first turn and so begin the intended loop in the opposite direction from the route instructions.  A great start.

Strong gusts of wind sporadically blast us, so it’s with hair plastered to face that we reach Llyn Idwal, a large lake nestled in a grand rock amphitheatre.  An eerie scattering of clouds hover low across the vertigos walls making them vanish off into the sky.  Our path skirts the lake’s shore, but somehow we have to climb up and over the slopes to our left.  Tilting my gaze upwards this looks impossible.  We decide to leave the path and squelch up the boggy hillside in search of a defined path.  And so begins our first foray into Welsh National Parks.  Over the course of the day, we come to understand that most ‘trails’ could be considered ‘interpretive’ in their route.  Just because a trail is marked on a map, doesn’t mean it actually exists on the ground.  GPS became our friend. 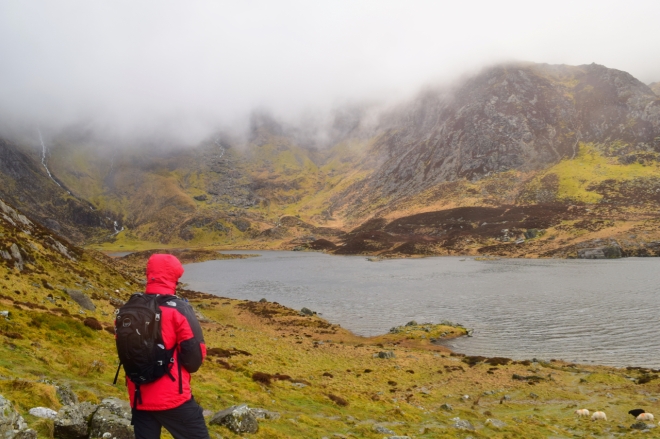 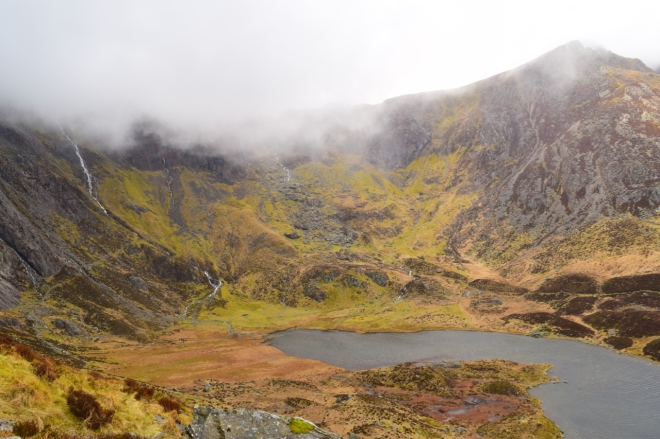 I actually think I would enjoy proper mountain-climbing, i.e. WITH safety equipment.  Harnesses and helmets seem like a jolly good idea – in the near-certain event that I slip and plummet to my untimely death.  These thoughts flow through my mind as we navigate the steep terrain using a combination of hands, feet, and trekking poles.  If it wasn’t for the two young, athletic guys who eventually appear behind us, I’m pretty sure we would have accepted defeat and turned around.  [I want it noted here that they both wore helmets.]  With an air of bravado, one of the guys casually assured us that it was possible to reach the rim of Cwm Idwal, hidden somewhere above.  Before departing he gives a veiled warning: the climb might be ‘a little spicy’, but we didn’t think too much of it, relieved to hear there is an option to avoid climbing back down the slippery rocks. 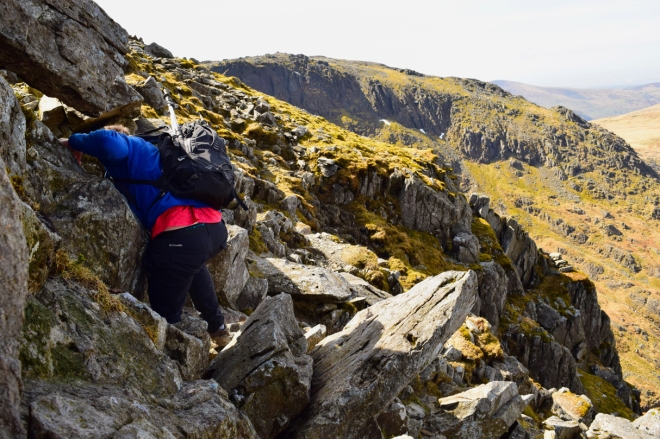 We try to follow the duo’s route but lose them within minutes.  The giant, polished boulders are slick with moss and difficult for someone with short legs to navigate.  At one point I make the mistake of looking over my shoulder towards the lake far below and lose my bottle.  It takes a momentary tussle with my own fears before accepting that perseverance is the less precarious option, so when we reach the top and the rain finally lets up I’m elated. 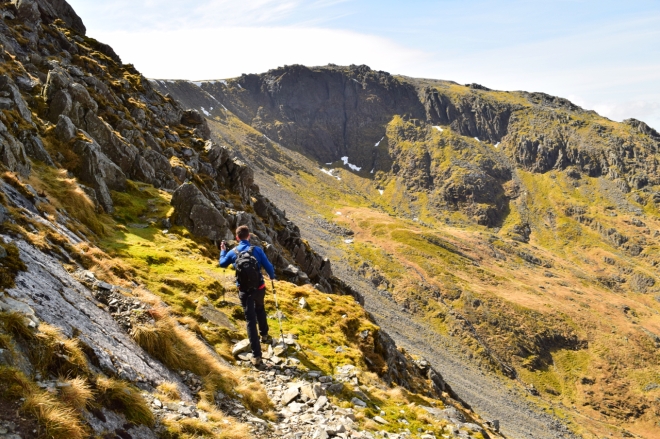 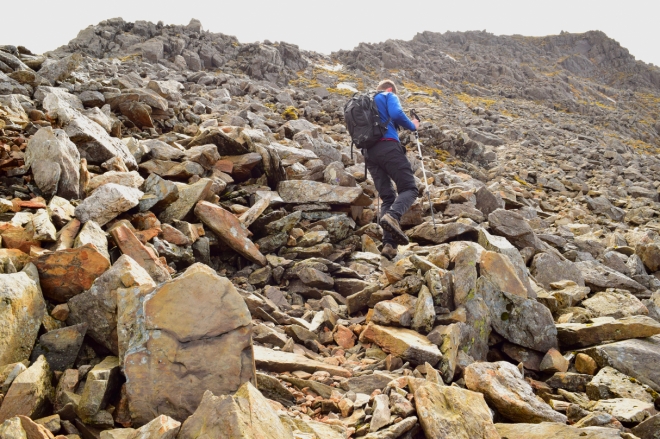 High up on Y Gribin ridge we perch on a patch of grass on the cliff-edge and can finally appreciate the views.  They are wide and reaching, with glacial valleys containing lakes on both sides of the deep drainages, and the Welsh coastline in the distance.  The landscape is scraggy and wild, with no trees.  Now the clouds have drifted away, tall, thin waterfalls are visible plummeting into the cirque hallow far below.  We reward ourselves with sugar: we may not have travelled far, but it’s already been a couple of hours.  The cold and the fright of scaling a mountain without a blazed path has taken its toll.  So we munch on M&S ‘granola bars’ which is basically a healthy-sounding name for a buttery flapjack with some dried fruit in it.  I highly recommend. 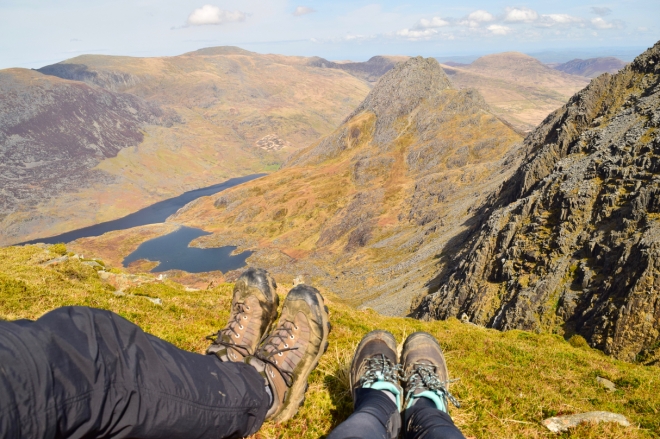 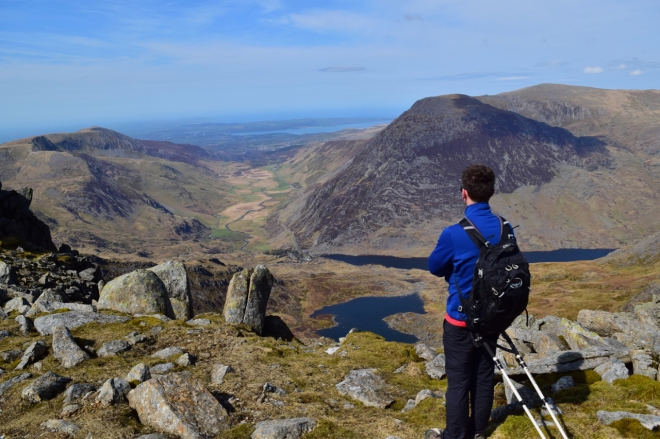 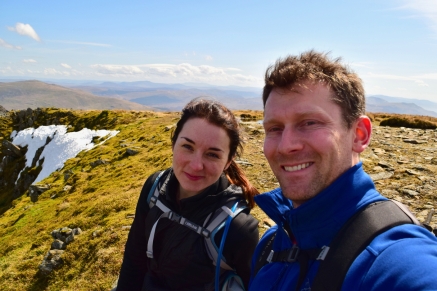 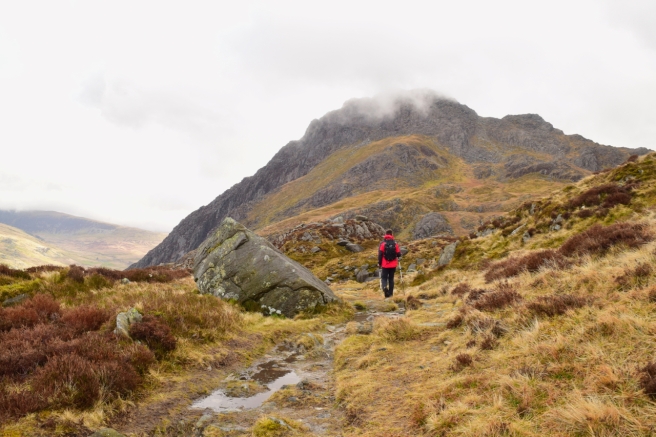 A brief break from rock-climbing

I’m no geologist, so I have no idea what I’m actually looking at, but what makes this hike so interesting is the diverse types of rocky terrain.  I notice shiny coloured stones that are perhaps quartz – and would look great in my bathroom – brittle shingle, and giant pinnacles that pile up to create the next landmark.  Castell y Gwynt (‘Castle of the Winds’) is a collection of spiky stones that resemble a Game of Thrones-style fortress.  Once again, the trail is ‘interpretive’, so each leap takes some consideration as we slowly climb towards Glyder Fach summit. 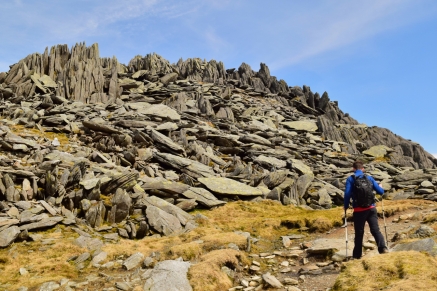 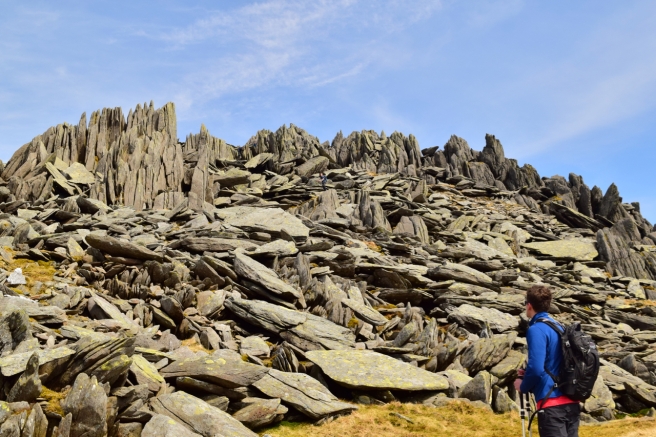 Close to the top we spot another famous Snowdonia photo-op; one that’s got to be up there with the likes of the sun-dial on Snowdon’s summit: the Cantilever stone.  The giant slab appears precariously balanced, projecting over a deep valley, but in reality it didn’t budge an inch.  We wait a couple of minutes for the small crowd of school kids to disperse before taking it in turns to capture our own opportunistic pose.  I think the results were pretty good! 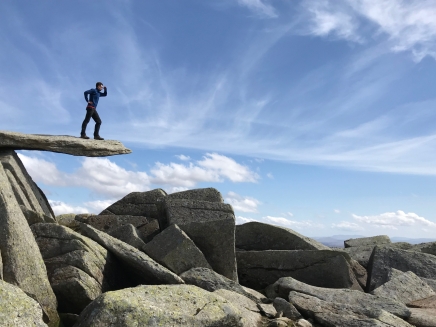 How many poses can we get on the cantilever stone before the next person comes? 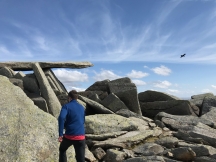 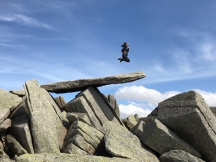 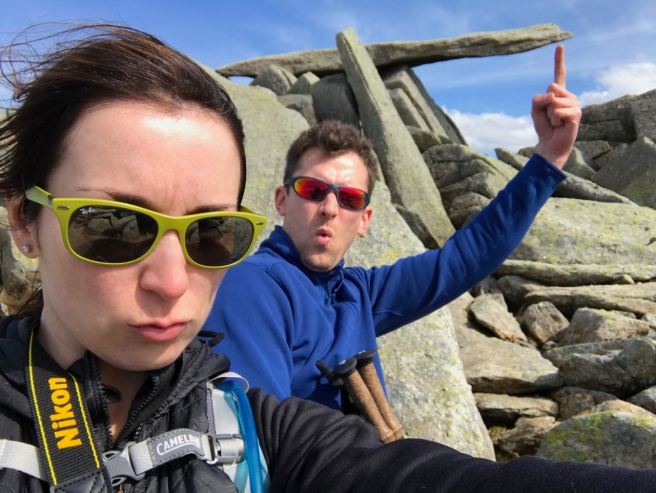 The scree path decending north towards Tryfan mountain is called Bristy Ridge for a reason: it’s categorised as a grade 1 scramble.  Not familiar with scramble grades we peer over the lip of it before unanimously declaring a 1.4-mile diversion via Miners’ Track as a no-brainer.

We slowly weave down more rocky slopes, getting closer to the south peak of Tryfan – the very distinct rock pyramid member of the 3000-ft club.  The final push involves mounting the saddle of Bwlch Tryfan, marked by a ladder stile over a distinctly Welsh stone wall that for whatever reason snakes all the way up and over the steep slope.  We enjoy a quick Snickers break to bask in the late-afternoon sun, before following a stream down into a deep basin.  Llyn Bochlwyd, a small lake we saw from the first summit hours before re-appears, it sits completely hidden from the valley floor below.  From there we follow a rough series of stone steps alongside a tumbling waterfall to re-join the loop at the intersection we missed earlier that morning.  At nearly 5pm I’m pooped.  It’s been a challenging but wonderous day.  Off now to find some pub grub! 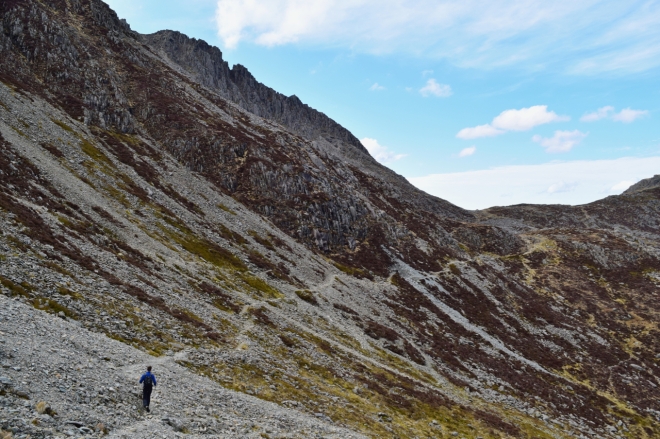 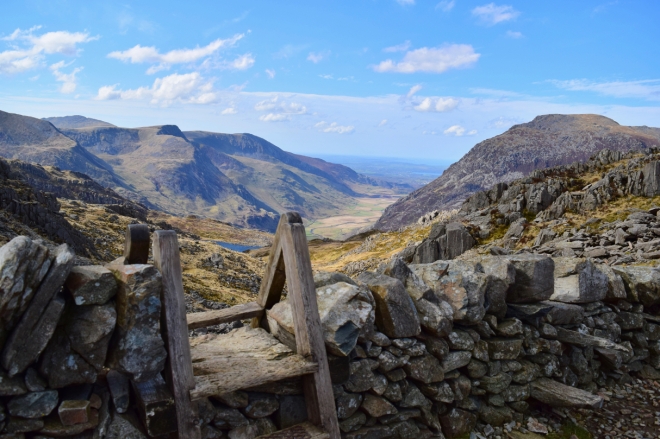 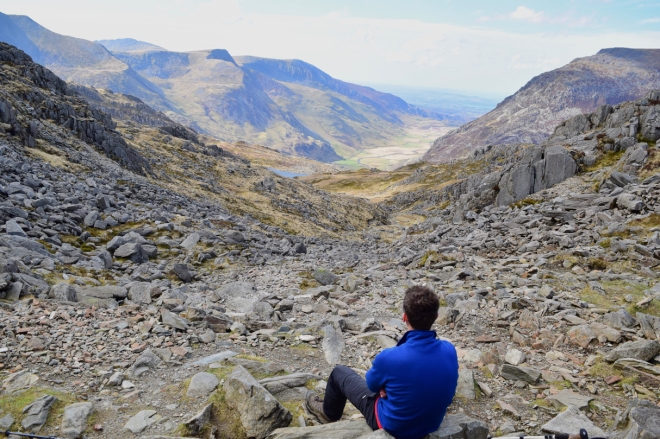 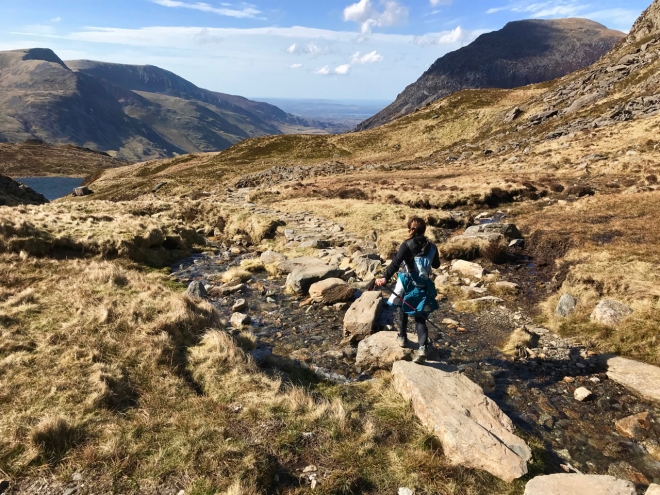