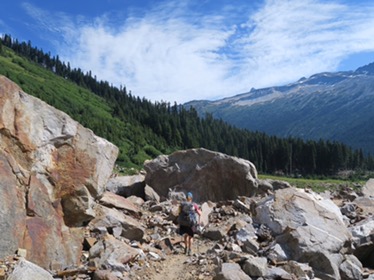 I have enjoyed today’s hike.  Following a gradual, but long climb up to Suiattle Pass first-thing, the hike became far less physically challenging.  I was able to admire and soak in my surroundings without focusing on my own pain!  Conrad on the other hand was in pure misery.  His feet are causing him to stop frequently and pop painkillers.  I think he is now low on supplies.  There really is very little we can do to find a solution.

A few miles from camp this morning I spotted a bright fire closure sign pinned to a tree ahead.  For a few moments I think my heart stopped.  On further study it was the connecting trail to Buck Creek that was closed due to fire.  The fire zone map showed that we were camped last night about 2.5 miles north-west of the impacted area.  Lucky for us Fortress Mountain shielded the PCT from the blaze – if it still is burning?

We are starting to see more north-bound thru-hikers from Mexico now.  I would guess a handful a day.  After over 2500 miles they must be able to almost taste Canada.  They overwhelmingly have a distinctive look about them.  It says, ‘I am malnourished and haven’t washed or groomed my hair in months’.  A lot of them take pride in this ‘authentic’ hiker look.  I was observing a very tanned thru-hiker earlier and noticed that he just scooped up water from the creek and drunk it straightaway.  What a time-saving not filtering our water would be!  I’m not going to risk it though.  I cannot think of a worse situation than to be out here with the trots!

From the top of Suiattle Pass the sky was vividly blue and the rock formations striking.  We have been so fortunate with the weather in Washington.  It is a state usually associated with rain.  We started weaving down into a deep lush valley, whilst gazing out at the Northern Cascade peaks in the distance.  From time to time we would stop to pick blueberries, a habit we have been doing the last few days.  I told Conrad he needed the fructose for energy.  I couldn’t help but wish the berries were soaked in sugar and baked in a pie though! 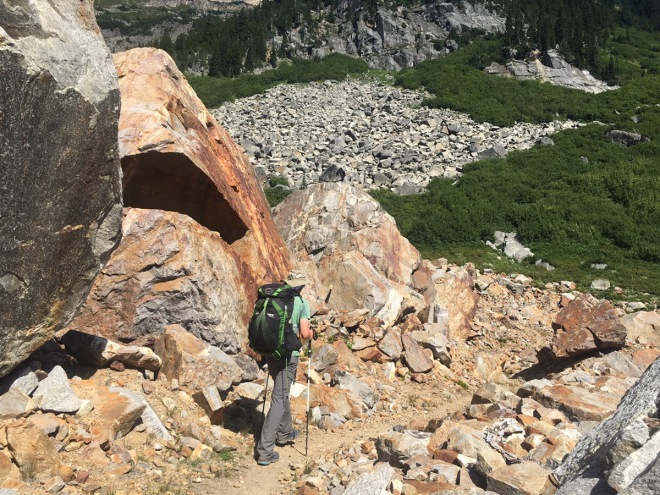 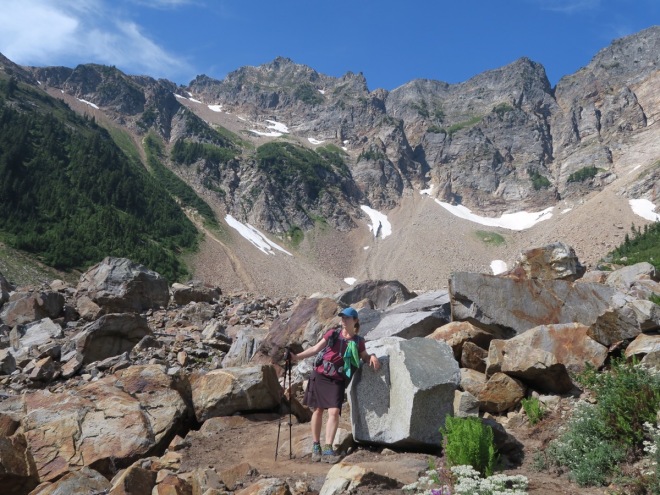 By the afternoon clouds had begun to form above us.  It was a welcome relief from the sun, as long as it didn’t bring rain!  Following lunch and an awkward foot soak in a bug-infested creek, we crossed the South Fork Agnes Creek over a series of fallen-trees.  I was so happy I didn’t have to take my shoes off. 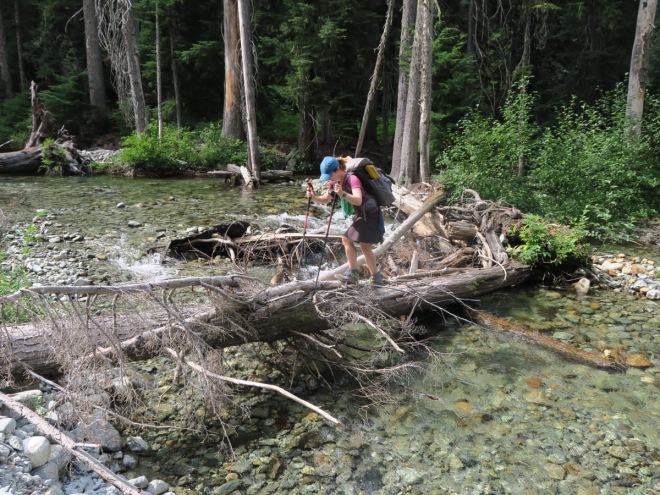 The rest of the hike took us through the valley floor, over undulating terrain of ferns and berries.  At one over-grown point I noticed on the GPS that we were exactly 100 miles from Manning Park, our final destination!  Hurrah!  We made camp right next to a loud creek under tree cover incase the grey clouds turned into a storm.  We are only 5 miles from tomorrow’s Stehekin bus!