This morning we set the alarm for 5am.  It was dark as I cooked our oatmeal.  But within a short window I watched the bright moon just above Mica Lake, and a pink sky beginning to illuminate the range opposite.  In that moment of wilderness splendour I pinched myself and wondered how often in my life I will wake up to such a scene.

I thought we had done a lot of climbing so far, but today was something else!  8400 feet of elevation loss, and 6000 feet gained.  Our feet are throbbing.  It started with a large descent into the valley that we were camped up high in, all the way down to Milk Creek.  It was a long stretch, with great views up top, but becoming increasingly covered in dense jungle towards the bottom.  The trail was very overgrown, and my legs got truly ‘bush-whacked’.  I look like I have been in a cat fight.

We were desperately trying to beat the sun hitting the side of the mountain for the big climb.  Those zig-zag switch-backs visible from camp last night were standing between us and Canada.  We began the climb at 8am.  It took us 2 hours to go 4 miles to the top.  I thought that wasn’t bad considering.  Even better still: I didn’t collapse halfway up!  Slow and steady was our strategy.

Almost an hour into the ascent and a pretty blond girl came down past us.  She told us that there were 24 switchbacks from there to the top.  The countdown gave me something to focus on for the remaining hour, although the closer to the top we got, the further apart they seemed to get.  And turns out she mis-counted – there were 25!  I was outraged.

Amazingly at one point we actually overtook two people.  The M&Ms, were two young sisters who are also hiking Oregon and Washington.  Their packs were about the same size as them, so our over-taking was probably not a surprise, but it made me feel good anyway!

From the top of Vista Ridge, we descended down towards Vista Creek.  It was a very long, slow stretch.  At the start we traversed around the rocky crest, with many seasonal streams flowing down into the canyon below.  The sun had risen and was full-blown beaming on us by this point.  Looking ahead, a dazzling string of mountains seemed to surround us, which must be The Northern Cascades.  They looked high, and in our way.  But glorious.  Entering a meadow of grass, The Sound of Music sprang to mind. 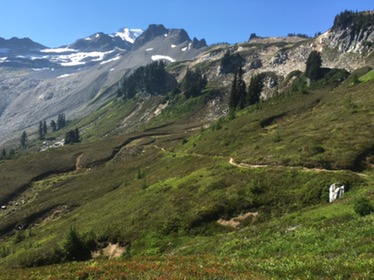 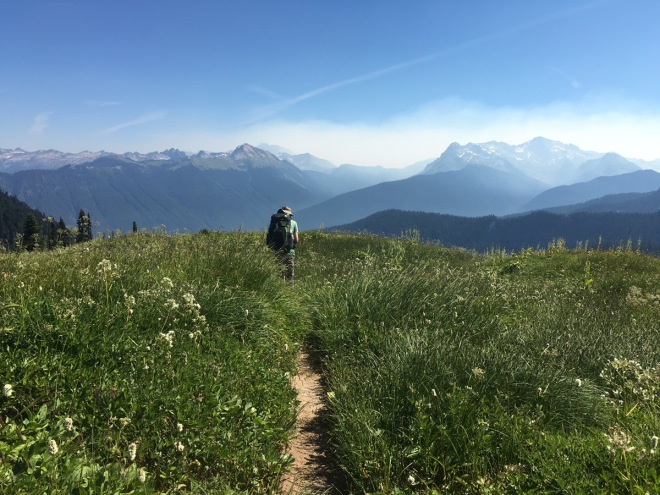 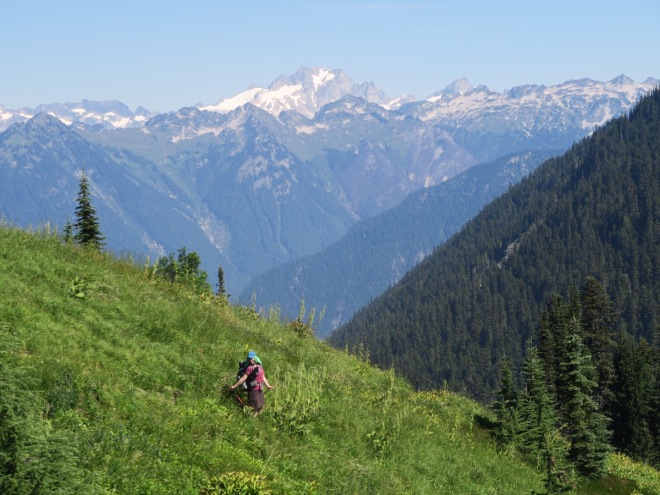 The trail become very narrow as it snaked down into Vista Creek.  Just like the first ascent and descent today, it seemed to go on forever.  How much elevation did we have left to lose?  We were walking through no more than a channel weaving in thick plantation.  I guess nature had decided to reclaim the land.  It was impossible not to keep tripping on roots and stubbing toes on hidden rocks.  I was concentrating so hard.  A man I spoke to later in the day said he actually slipped off the mountain edge in that section because he couldn’t see the path.

Large parts of the trail today were overgrown, with countless blow-downs.  We completely lost the trail at times.  Ironically, we bumped into a PCT maintenance crew down near the flattish area by the Suiattle River.  They appeared to be clearing an already pretty decent section of trail which was nice and wide.  Dan and two other people also commented on this strange logic.  I am just relieved that the undergrowth didn’t contain poison oak, otherwise my legs would be screwed right now!

Shortly after lunch we attempted to trace a branch of the Old PCT route which crosses the grand Suiattle River more directly than the new route.  This would have saved us 5 miles, after the PCT was re-routed to the west due to a series of washed out bridges.  We failed.  Vista Creek was too fierce to ford, so we had no choice but to turn back.  That little adventure wasted us about 45 minutes in the afternoon humidity.  Luckily for a couple of miles after that the elevation eased up through a grove of giant redwoods.  Just one more mountain to scale up in the late afternoon and we made it to camp at 7pm.

We are camped above Miners Creek.  It is raging below us.  It was dark before we got zipped into the tent.  What a massive day.  I hope I pass out now.