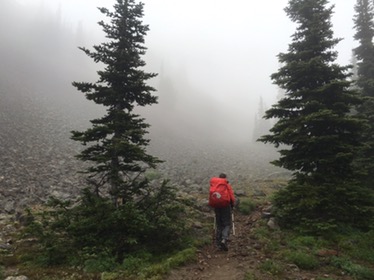 On exiting camp this morning I couldn’t feel my fingers or toes.  We were in the mist high up on Big Crow Basin, in a little site surrounded by trees.  Since the early hours the distinct call of elks sounded out around us.  But they were invisible, engulfed in mist.

The hike was fairly gentle in gradient today, which was a relief.  Being cold and rained on with wet feet from the start made it difficult in other ways.  It is hard not to feel deflated in these conditions.  It might have been more enjoyable if we had the promise of finishing the day with a hot shower, food, and dry clothes.  We are still a few days off those luxuries.  Last night feeling hungry we caved in and lit the stove in the vestibule of the tent.  Not a recommended move, but we needed a hot meal!

As our elevation dropt we came down from the ridge and into an eerie moss-coated forest.  It was very green.  I occupied my mind counting mushrooms and other fungi that seemed to be thriving there, and knocking rain drops off the undergrowth with my poles – what a riot!  Anything to stop my mind wandering onto the food I craved.  This cold weather spell is making us ravenous!  I decided I most wanted some banana cake, a loaded bagel, and a really hot mocha.

We had decided to aim for Ulrich shelter 13 miles in for lunch.  I had hoped that we would light the stove and dry our wet tent and socks out, but availability of wood prevented that.  The little dark wood cabin was sparse, but it provided some relief from the rain so that we could cook inside.  We were not the only ones with that idea,  Within a few minutes of arriving we were joined by a lady and her mother who were going south-bound.  We chatted to them whilst cooking a Thai curry (not my favourite freeze-dry), and then all hell broke loose.  15 Boy Scouts flooded the cabin, with 5 adults.

While chaotic to begin with, they were friendly enough.  Many wanted to chat because they liked our English accents.  A couple were trying to mimic us.  We gratefully obliged whilst trying to sort out our stuff and get going.  The rain had really picked up in the time we had been there.  Just before we left I was talking to some of the leaders out on the deck, and got offered food!!!  We had 2 homemade cookies each, some red vines, peanuts, and a packet of Skittles.  My day was made!

A final 5 miles in the rain and increasing mist led us up through an old burn zone.  We settled on a camp next to a small Spring on the hillside for two reasons: 1) There is no other water for the next 12 miles; 2) We didn’t want to walk anymore!  I hope that tomorrow is better.  I have no dry socks left.