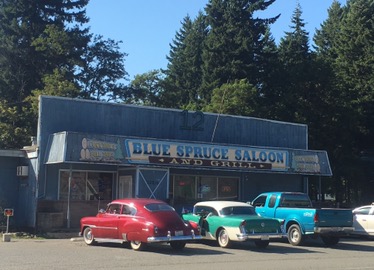 There is nothing like the promise of a shower and hot food to get me out of my sleeping bag, even if it is freezing!

Only 8 miles stood between us and Highway 12, where Mark’s car awaited us at the ski pass.  Overall I would say that I enjoyed the hike (except the half-mile road walk at the end).  It seems to me that an early 8 miles of not too steep elevation, followed by lunch and a shower is a civilised day out!

The initial miles took us up another 1100 feet through the forest, passing Shoe Lake, to where sweeping views opened up.  Over the pass, we could trace the trail leading off into the distance as it skimmed around a large basin.  On the horizon, a structure which we identified as the top of a ski lift was just about visible.  How encouraging!  I like to be able to see the finish line.

A marmot dashing out across the trail almost made me plunge off the edge of the mountain.  They are funny creatures, a kind of squirrel-beaver hybrid.  We also saw our first horses coming towards us.  We had seen lots of signs of them along the way (i.e. their manure), but until now had not appreciated what an inconvenience it is when they come down the trail ahead of you!  Apparently they own the trail.  The remaining big descent down through forest to White Pass was uneventful.  We did our best to dodge the mozzies, and declined the temptation to take a shortcut down the Chairlift Trail, which traces the lift vertically down! 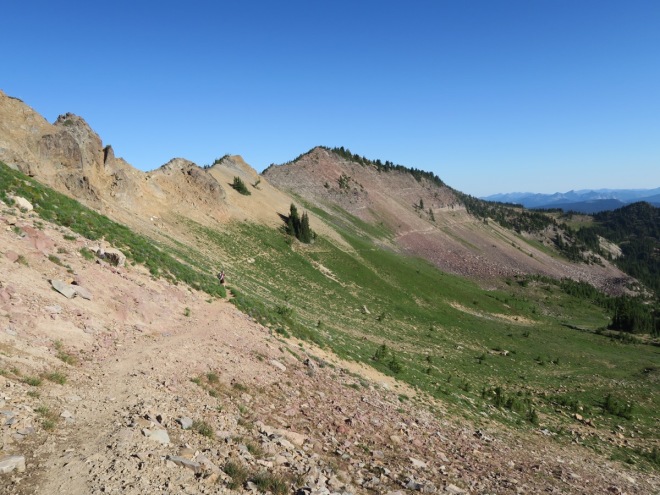 At White Pass, we found the closed ski lift terminus, and a gas station.  The Kracker Barrel shop at the gas station took $18 off of us to pick up our resupply boxes there.  We felt ripped off, so couldn’t wait to leave.  An online shopping order had dispatched everything separately so we had 6 packages in total.  Much to our relief and delight, Mark’s car was parked there and the key worked.  We piled our stuff in, and were about to drive off when I received a message from Dan who was 10 minutes up the trail.  We turned around and drove to the trailhead to collect him, before heading the 20 miles to Packwood.

Packwood is a strange place.  More of a road-side pit stop than a town really.  There is no phone signal here.  The one sports shop is closed, with a hand-written sign in the window which reads: “At Verns doing pickles”.  Who knows what that means!
We checked into the simple motel and got a burger from the place next door.  After that we kind of just wandered around.  We replaced our gas canister at the hardware store (a place where time stands still), got an iced coffee, and then took a stroll around the grocery store.  It is funny how air conditioning and looking at the local food selection is now entertainment!

Not long after lunch Mark messaged me to say he and Steve were an hour from the trailhead.  Conrad drove back to White Pass to meet them both, whilst I unpacked our hiker boxes.  We enjoyed a drink with them and Dan.  They offered to give us a ride to a real town an hour away, which was highly tempting (there is a cinema and a Costco there which I ascertained from Google Maps)!  But we resisted as it would have been more difficult to get back on the trail.  It was funny to hear their stories of the last few days.  Hiking just a few miles behind us, they would ask south-bound hikers about the ‘British couple’ and get updates on us through the hiker grapevine!

Diner was at a ‘spit and sawdust’ kind of place across the street called The Blue Spruce Saloon.  Full of locals, with a shuttle board table and a dark horseshoe-shaped wooden bar, I felt like I was in a Western.  Time now for ice cream to finish off the day…