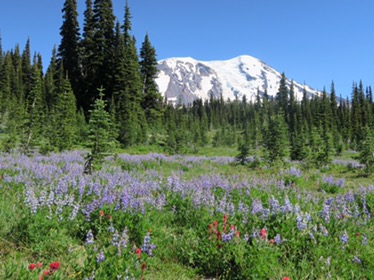 A difficult decision was made yesterday to continue the hike.  There is now no doubt in my mind – we WILL reach Canada.  No more dwelling in my own misery, I need to toughen up.

I enjoyed the hike today.  It was a good day.  It started positively with two acts of kindness. Firstly a local man I met in church named Doug Anderson gave 5 of us a ride back to the trailhead.  Our usual 3 were joined by another hiking pair who had been staying with us at the General Store – Steve, who owns an espresso business in Halifax Canada, and his friend Mark, who is in his home state.  The second act came from Mark, who has given us one of his car keys so that when we reach White Pass we no longer need to hitch a ride!  He expects to be a day behind us, so we will [hopefully] drive to town and return to collect them the next day.  Oh and I finally got a huckleberry pancake!

The hike began in last year’s burn zone.  The PCT in 2015 had been closed from this trailhead, forcing thru-hikers to take a boring 24-mile road detour whilst breathing in the smoke.  I was glad to be on the trail, as the dead trees revealed fantastic views of the snow-coated Mount Adams, which we approached from south-west to the northern face.  I am relieved that the PCT doesn’t scale the summit of this behemoth, because at over 12,000 feet I think I might not have made it! 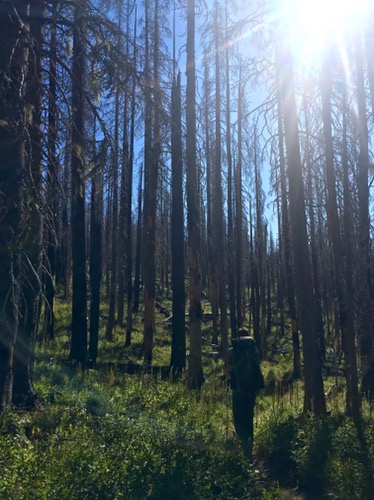 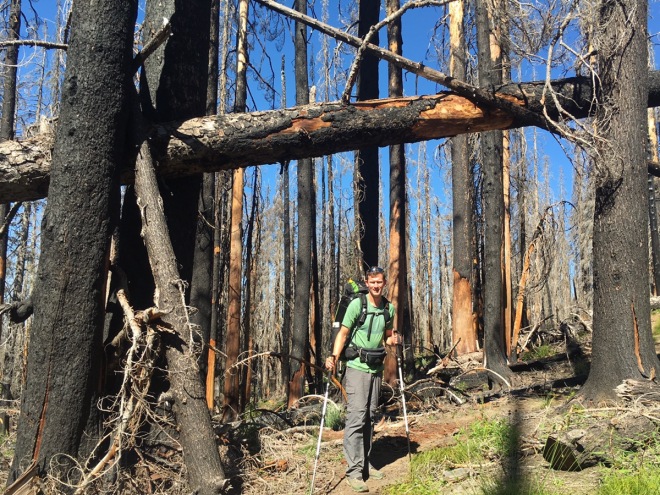 This burn area didn’t feel stark and miserable like others we have crossed.  Instead it was covered with wildflowers and grasses.  So many colours, especially a blue-purple bloom which from a distance made me think of English bluebells.  Butterflies and lots of chipmunks hurried themselves. 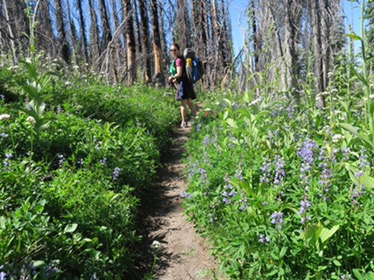 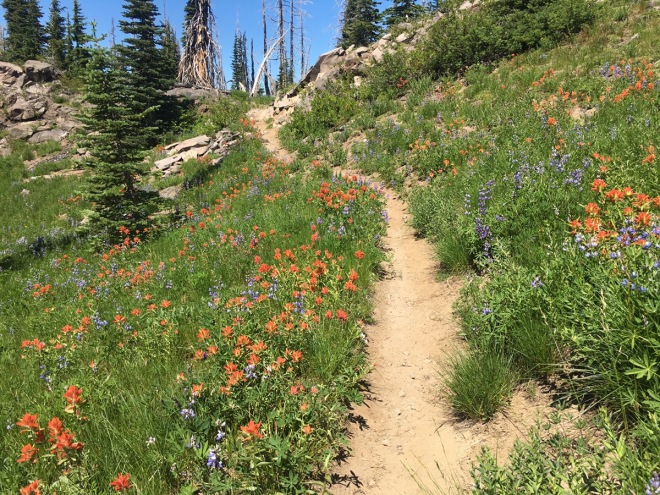 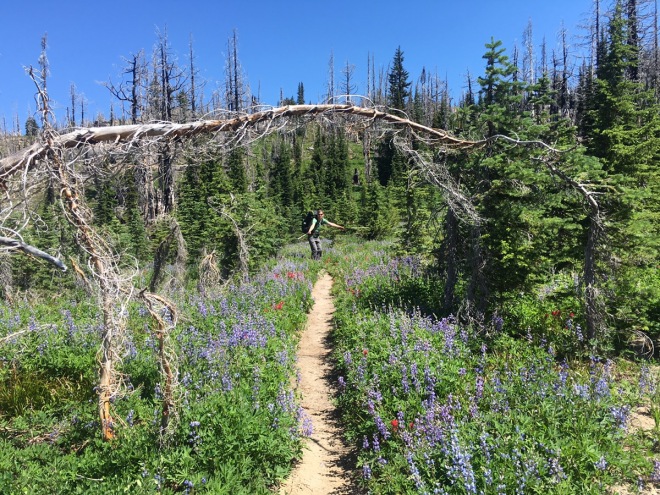 We met a handful of other hikers today, many heading south-bound.  A young French guy named ‘No Spoon’ chatted with us about Brexit.  I treaded diplomatically, not wanting to upset international relations, but ended up pretending to need the toilet so that he would go ahead!  We were struggling to climb and talk at his speed anyway.  And more importantly, we were down-wind from him too!  Dan told us later that the guy only had peanut butter to eat for the next 66 miles.  If I had known that I would have given him some of our stash – considering we are trying to complete this section in 3 days, our food bags are just as heavy as ever. 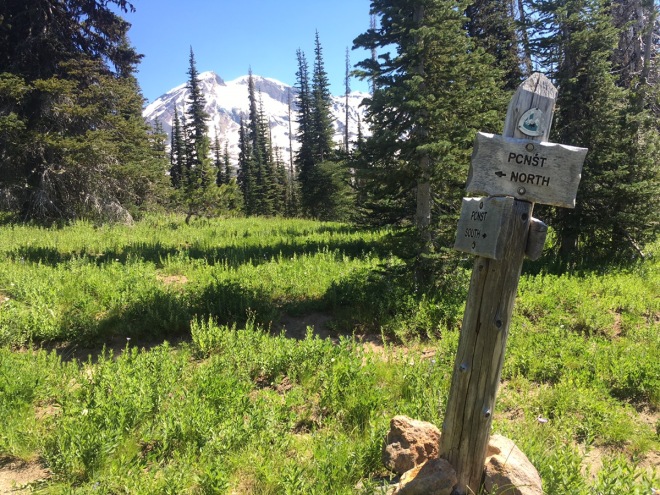 There was just one element today that hampered our experience.  Eating lunch at the pretty Riley Creek, we were hounded by small black flies that bite!  These little cretins were unbelievable.  As Conrad said: “what a beautiful lunch setting, ruined by nature”!

Departing from the green tunnel, we finally got some breathtaking screen-saver worthy views.  High up on a ridge at one point, a 360-degree panorama showed us Mount Adams, Mount St Helens, and Mount Rainer surrounding us.   Hiking on, the detail of Adams’ frosty-white glacier became clearly visible.  It was most definitely not the kind of views I see on a typical day in London.  These mountains make me feel very small.

The last 5 miles after filtering at Killen Creek were smooth-sailing.  It had started to cool down a bit in the late afternoon, and we were gently rambling downhill into camp.  Awesome.  We passed many small streams, some of them with mini crushing falls.  It was rather tranquil. At around 7pm we reached camp at a lava spring.  The water is crystal clear and flowing. 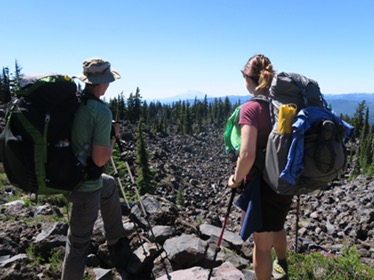 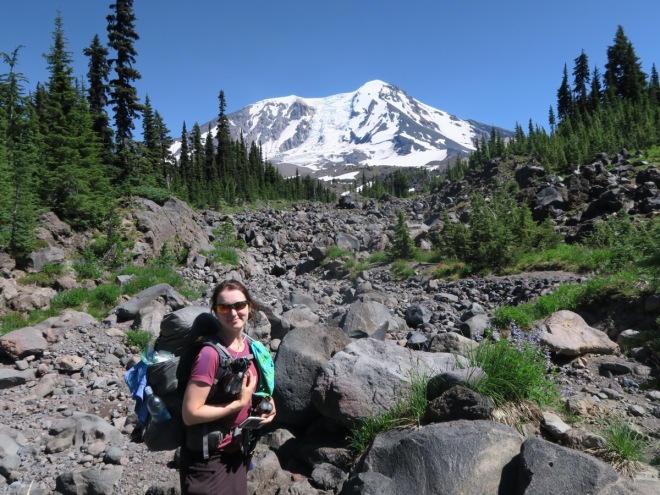 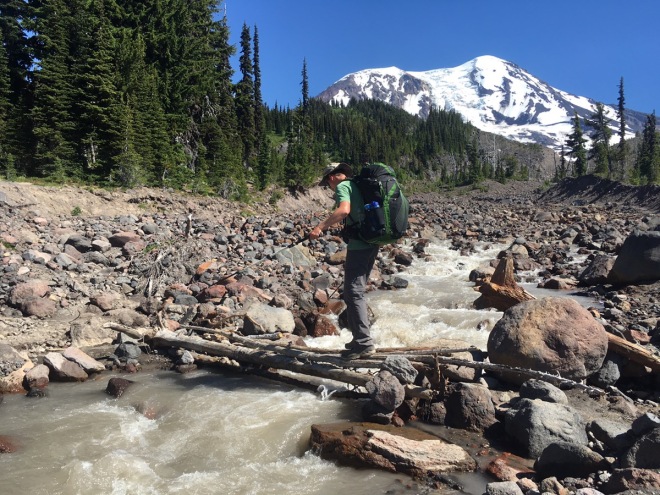 Tonight will be our 5th night of camping since I set our target goal of 25 nights (or less) at Cascade Locks.  I have my fingers crossed! 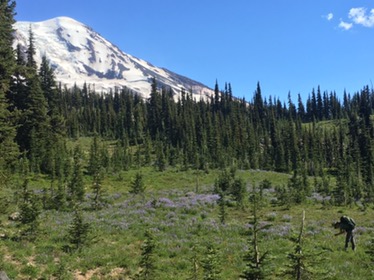 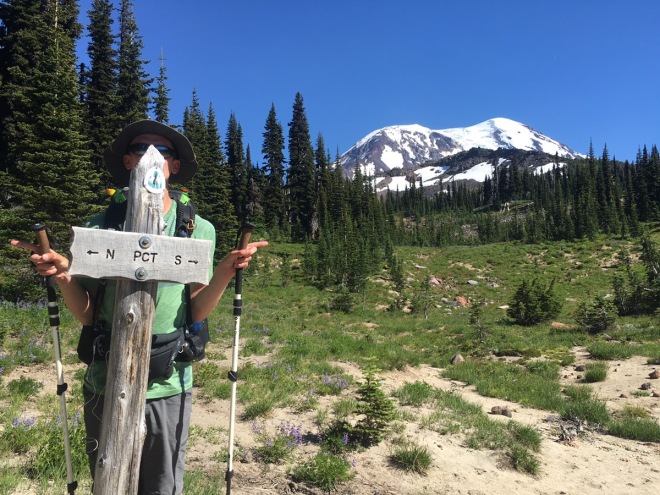 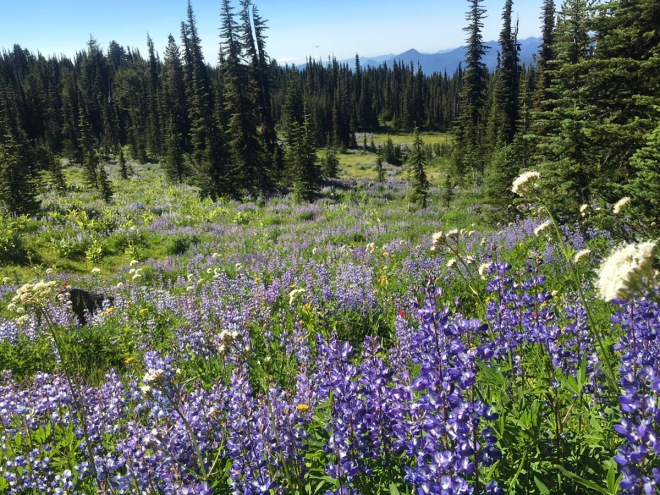