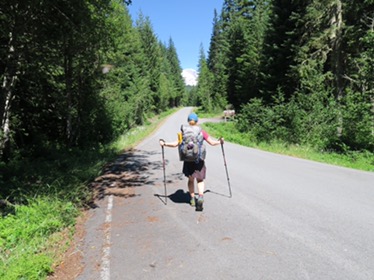 I would like people to think that we just managed to hike 46 miles in the last two days because we have become so super fit that it was easy.  It was not.  Nothing ever appears to get easier out here.  The reason we pushed so hard despite the pain, elevation, and heat wave was because we just couldn’t bear the idea of camping another night.  We stunk, and with all this extra effort, we just can’t satisfy our hunger! 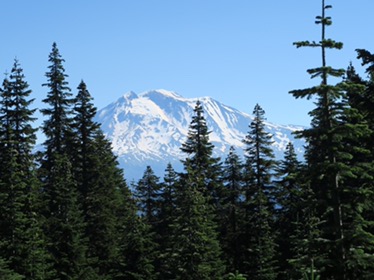 When we set the alarm at the new super early time of 5am, we both hoped that we could reach the access road for the resupply point at Trout Lake.  But we were not sure of our ability to make the 23 miles.  Another 3000 feet of elevation gain, and a 11-mile water carry were a few obstacles between us. 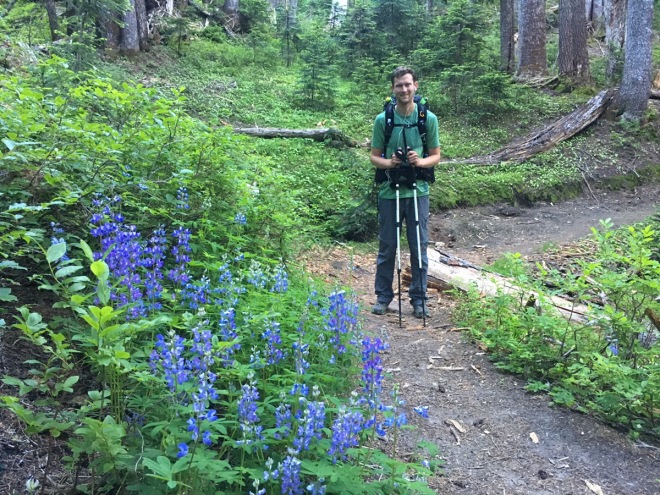 From the start of the day we both walked with headphones on in silence.  I was aware that I was in a crappy mood.  I think we are just worn out, and I felt a new pain in my hip (together with a strain issue in the same leg) which worried me.  Honestly, if someone had offered me an escape route I probably would have taken it.  I was not able to muster up the energy to see the positive side of anything.

The lack of pictures today is a testament to the repetitive, boring forest scenery we have seen in Washington so far.  One positive point to note was the trail had been freshly maintained, evident by wood chipped cut logs.  If we had been hiking in this heat and climbing over fallen trees that could have finished me off!  As it was twice today out t-shirts got dunked in streams in an effort to cool us down!

Just when I felt at my lowest point, we finally got some trail magic.  Reaching Forest Road 23 at 6pm in pieces, it was still 13 miles south to Trout Lake.  I got my homemade cardboard hitch-hiking sign out ready.  The road was empty.  For a few minutes I started to feel panicked that we would never get out of there.  One truck passed going the wrong way.  Then a minute later a red Honda Civic came from the same direction as the first, but he pulled up next to me.  Conrad was in the bushes attending to nature’s call.  The old man rolled down his window and asked me if I was waiting for him.  Oh great I thought, I have myself a weirdo!  But it turned out that Bill, a local, had picked up two other hikers today and had driven up here just to make sure there was no one else waiting in the heat!  It was still 90 degrees at 6pm.  What a diamond.  He wouldn’t accept anything in return either, just telling us to ‘pass it on’.

Trout Lake is not really a town. It is a drive-through place with a post office, general store, and a gas station.  Lucky for us the gas station also doubles as a cafe, and Conrad’s prayers were answered in the form of a burger and fries.  I had a chicken sandwich, fries, onion rings, and a slice of homemade huckleberry pie a la mode, and could have still carried on.
Whilst sitting in the outside yard, Dan finally arrived.  We had been wondering about him.  At the last water spot he had set out to the road 20 minutes ahead of us, yet when we got here there was no sign of him.  It’s not like there were many places that he could be around here!  It turned out in true Dan-style that he had been ‘kidnapped’ by a pair of grannies who had driven through the town and carried on south.  They had no idea where they were going.  He had to get out and call Trout Lake General Store for a ride!  We found it hilarious.

Unfortunately the issue with arriving in such a small place on a weekend is there was no beds available.  We all headed to the state park campground for another night of camping!  At least we had a [rustic] shower, and will go to bed with full bellies.  We now need some downtime here to try to recuperate, so we can muster up the strength to push on.