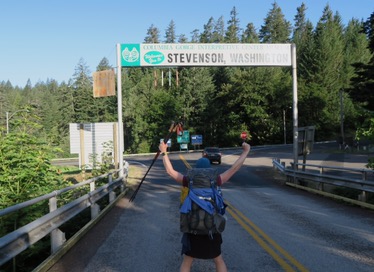 Today was momentous for two reasons:  we crossed into a new state, and I got given a trail name.

We left the motel around 7am with ridiculously heavy bags, thanks to all the bread products we had loaded up on.  We would live to regret that later!  To enter Washington state we first had to cross the Bridge of Gods.  This was an experience.  There is no pedestrian sidewalk, so whilst keeping a careful eye on the oncoming traffic, I was simultaneously trying not to look down into the crushing river below.  It was also windy.  Really windy. So a few lucky cars got a flash of my knickers as I held onto my hat, poles, phone, glasses for dear life!

Today has been one of our most physically demanding, but I am proud of how far we got.  It started with a never-ending ascent up and around Table Mountain, named for it’s flat top appearance.  Overall we would gain nearly 5000 feet, and that first climb felt relentless.  Although mostly under the shade of forest, there was no air circulating and we were pouring with sweat.

The trail name came early in the hike.  I should state that I may not adopt it.  Whilst having a break, I stepped to the side to take a tinkle.  I should have gone further from the path to somewhere more discreet with hindsight, but we hadn’t seen anyone all day.  Mid-flow Conrad shouted over “someone’s coming!”  So I panicked.  I tried to stop but couldn’t, and was so concerned with exposing myself that as they walked past I hiked my knickers up and held my knees together.  They smiled.  It was pretty obvious from the dripping down my leg that I was peeing myself! Mortified, I rinsed off in the nearby stream.  Hence the new trailname: Pissy Pants. I hope it doesn’t stick.

On the western side of Table Mountain we found ourselves traversing along our old friend, the lava field.  A pair of bald eagles glided above us.  In open areas we caught views of Mount Adams, a domed-shaped peak out east. Later, the other side of the ridge we spotted the distinctive crater-topped St Helens.  Yelping out loud like an idiot, I also saw another snake slivering out of the undergrowth at an alarming speed.  This one was smaller than the first, and had long yellow and black stripes.  Once again due to my lack of snake knowledge I have no idea if it was potentially dangerous.  I spent the rest of the day scanning the floor.

Our highlight today was a cold pizza lunch and crisps.  I realise how sad this is.  It came in the middle of an 11-mile draught area.  In the exhaustion spirits were low.  The lunch helped.

After all that going up I was sad to realise that we had a 2000 foot descent into camp!  All that hard work felt wasted.  After 11 hours on the trail we arrived at a site near Rock Creek.  Shortly after, another hiker named Steve from Reno followed.  He recognised us from Timberline Lodge.  His trailname is worse than mine – Skidmark Steve!  He insists this is because of the state of his beige hiking shirt which has been sweat stained beyond saving.  Dan also showed up a bit later (having taken another forest road ‘alternative’ for part)!  We all sat around camp eating together.  It was an entertaining end to a tough day.