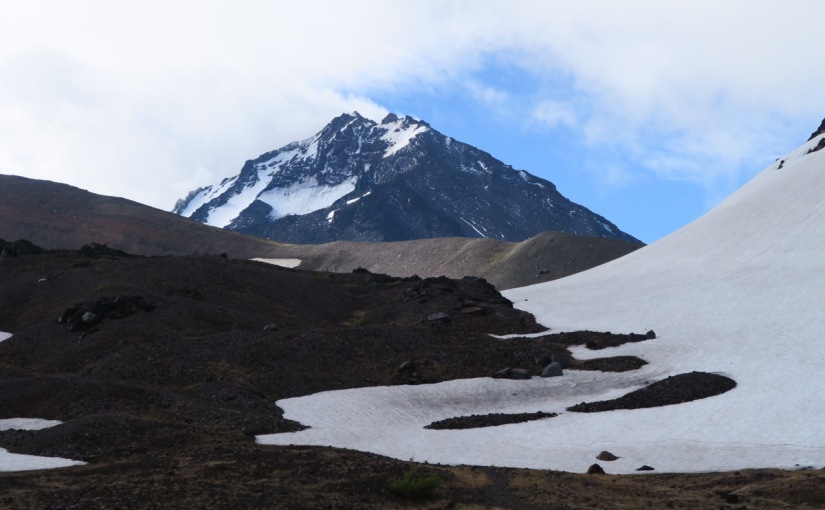 We started and ended our day completely frozen!  What is this Oregon weather playing at?  It was supposed to be really hot by now…

Camping at over 6000 feet last night we appeared to be in the clouds of North Sister.  I spent the night tossing and turning feeling cold.  Our sleeping bags are meant to be good to minus 9 degrees Celsius!  When we started hiking my muscles just couldn’t warm up and were crying in pain.

The Obsidian Limited Entry Zone is a protected area which the PCT crosses for a couple of miles, unique for its indigenous volcanic glass cliffs.  The glass was used by Native Americans to make tools.  Even early in the morning the ground was catching the light and glistening like thousands of tiny mirrors. Luckily we didn’t seem to have punctured the tent on the stuff last night!

The snow from yesterday became more frequent as we traverses the northern edge of the Sisters and Little Brother.  It was easily crossed, but slowed us down a lot. 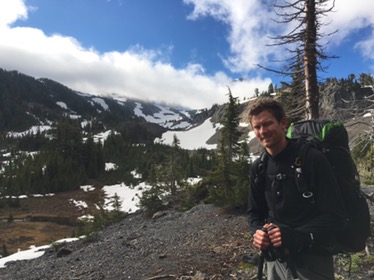 I thought we were going slow, until we reached our the lava!  Wow, that stuff sucks to walk on – especially in trail running shoes!  The first section up though Opie Dilldock Pass formed an endless series of switchbacks where we didn’t appear to be getting anywhere.  It was hard-going, nearly 3 hours into our day and we had managed 4.7 miles! 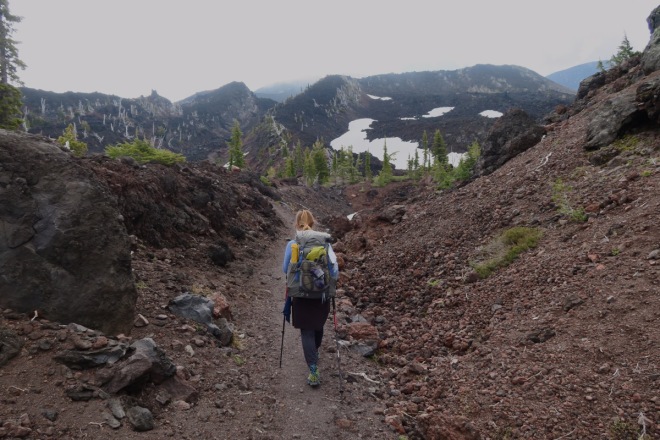 The lava continued and grew in its coverage up and around McKenzie Pass road.  There were quite a few day-hikers around, probably due to the road access. We were stopped a number of times to chat, and two separate people asked to take our photos.  How strange, but funnily!  Some people are so captivated by our mission to Canada.  We were told that we were: ‘superstars’, and even ‘heroes’!  I seriously beg to differ, but it was nice to hear anyway!  Shame they didn’t open up their packs and reward us with some food – well, all except one lady who gave us a spare Lara Bar.  Thank you so much to her. 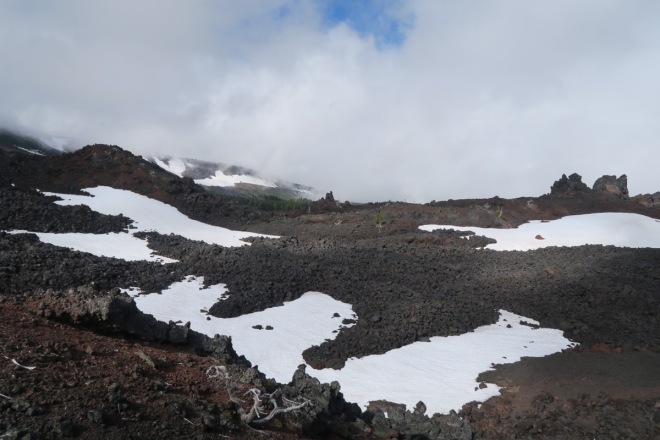 This brings me onto food.  Maybe hiker hunger is rapidly taking over.  I am increasingly consumed by thoughts of food.  I mostly crave salty savoury items, such as bread and butter, baked potatoes, or chips.  Our diet on the trail largely consists of a fairly decent breakfast of oats or granola, followed by snack bars most of the day, and then a dehydrated meal (usually pasta) for dinner.  I am never satisfied.  I wish that we could carry more.  Food is heavy.  Whilst feeling quite miserable in these thoughts earlier I asked Conrad why I am the only one who seems to be suffering, and he swiftly confirmed that he is constantly hungry!

We had a camp in sight today at the 20-mile mark.  We gave up 3 miles short at nearly 7pm, having started hiking at 7:15am.  The last section of lava had finished us off!  The fist-sized rocks are so difficult to walk on.  We kept rolling our ankles, and I was starting to feel shin pain from all the jarring movement.  The wind coming over Mount Washington was battering us. 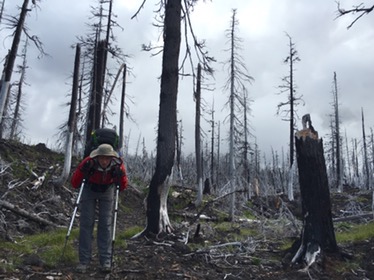 I hate not reaching a goal.  This means we are now 7 miles from making breakfast at Big Lake Youth Camp, a popular PCT stop.  I’m not sure if we will make it in time, but given that food is at stake we will give it our best shot!