We are going to sleep on it.  That’s what we have agreed.  After a very difficult 18 mile day carrying the most heavy back-breaking packs yet we are in no place to make any hasty decisions.

The day started much better than it ended.  We had a cooked breakfast in the lake lodge, and headed out around the PCT Rim Trail ‘scenic’ alternative.  The lake had an enchanting mirrored effect in the early morning light, casting reflections of the castle-like caldera walls in the water. 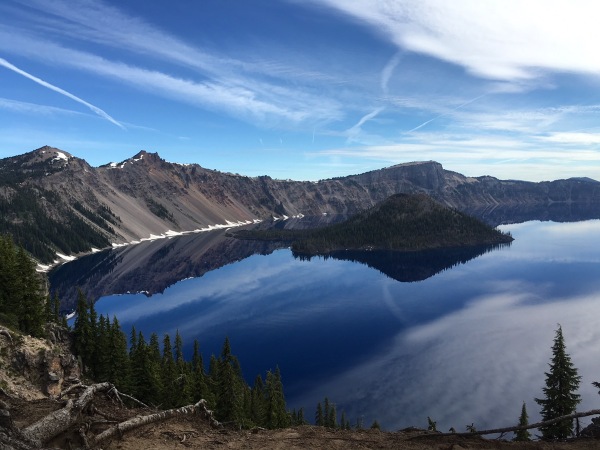 Our strategy for the long waterless section was to carry 4 litres each, and melt snow when needed.  Our particular backpacks are not designed to carry these weights, so the resulting day-long pain did not make for a happy hike!

For the first 6 miles the blue lake water teased us from beneath (it is inaccessible).  Water rationing was harsh given the hot temperatures, and when we did stop to melt snow it took us an hour to get a few measly litres.  The snow patches ended not long after the lake, so we have had to carry our full capacity for the entire afternoon just so we have the minimum water needed for camp and tomorrow’s hike.

Late afternoon as I was walking in a zoned-out state I started to become really angry.  How can we be walking through a National Park and there be no water facilities whatsoever?! I passed the time mentally writing a letter of complaint to the authorities.

The trail itself weaved up and down around the crevices of the lake to begin.  At The Watchman, the highest point this trail reaches in Oregon and Washington at 7676 feet, the snow became very icy and we were forced to head for the parallel Rim Road.  Of course this being America the road had no safe sidewalk designed for pedestrians so this was no safe option!  The Watchman trail itself which crosses the Rim Trail and heads to the peak we discovered was closed.

The rest of the hike became much drier, (just when we needed the snow), even passing through an area called the Pumice Desert named after the dry airy-like rocks. It contrasted against the landscape that we had been in a few hours before.

So sore feet, fractured necks (well probably!), coupled with dehydration and our constant friends the mosquitos made the day fairly unbearable.  We linked up with Dan at around 6:30pm who was sitting by the side of Highway-138 eating his dinner in an attempt to reduce the bug pestering in the forest.  Not exactly a scenic spot.  He is also in a bad place.  He said he was hoping that someone would just pull up and offer him a lift anywhere!  We are now camped just off the road as we couldn’t walk any further.  For today we are done.