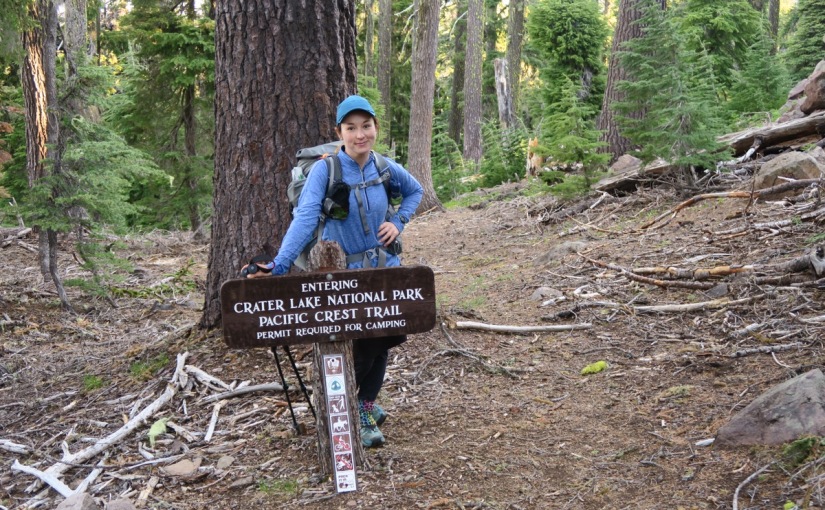 Our exit from camp came fast today – it helps when you have no fuel to cook anything.  We were also motivated to make lunch at Crater Lake!

The packs are finally feeling a lot lighter – containing just a day of food and 1 litre of water.  We hiked as fast as we could but we’re both experiencing jelly legs.  They were just non-responsive!  I think it was largely dehydration.  I was stumbling all over the place.  We need a rest. 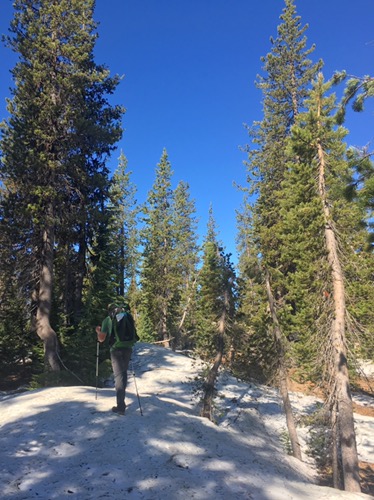 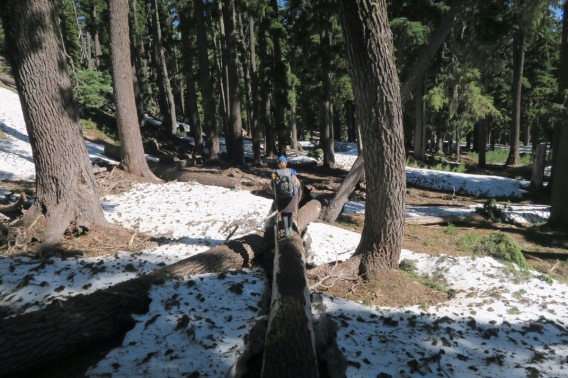 It felt good to enter the park boundary a mile in, but we were still a way from anything.  At 5.5 miles from our destination I threw myself down into the dirt of the trail and just laid there.  Conrad came and sat with me.  It was a low point!  We stopped more than every mile after that to eat small bits of food for energy.  We were the walking dead.

Snow and trees remained our nemesis.  Those and the mosquitos who love the snow melt.  The snow got more plentiful and softer the closer we got, to the point it felt like we were walking through sand. They were the slowest miles despite the effort we were putting in!  When we finally saw highway 62 ahead I exhaled.  A small van was parked across the street and a girl from it started walking over to us as we looked at the map.  I was sure she was about to offer us a lift into the campsite village, but no, they had broken down and was asking whether we had phone signal!

So off we trudged for the last stretch off the PCT into Mazama Village.  It is not actually much of a village, but just the sight of the two small wooden buildings made me want to cry with happiness!  We had made it.  Hot food and a shower awaited us!

After a satisfying lunch of burgers, we were told our cabin was not ready yet.  So we joined a small group of hikers sat outside the camp store, including our new friend Dave.  Dave was loitering around drinking beer – I’m not sure what time he had started drinking but he was very animated.  I found him intense in my fragile state.  Maybe hiking alone can drive a person a little crazy?  He referred to our collective group as ‘Hikertrash’.  He can speak for himself – we may smell, but we’re not there yet!

We met two friendly ladies called Lori and Vicky who have hiked the Californian section previously.  They told us that Alfred ‘Speedball’ had arrived the day before and quit the trail.  He said it was just miserable.  We were completely shocked as he had been so confident, had a super light pack, and was very well-built.  They also revealed that in their opinion this had been the toughest section they have ever walked because of the conditions.  This made us feel some solace.

Whilst sitting in the sun wearing our hot rain gear (clothes in the washer), Dan from Kentucky arrived following his 2 days of road walking.  He looked very tanned.  He was joined not long after by Jesus lookalike Habit, who brought further news from Fish Lake that Dirty Hippy had pulled out.  Another shocker!  This guy was a determined 19-year old about to join the marines who was making record time from Mexico.  He was even climbing further mountains on the side with an ice axe just for fun.  His reason for quitting? He had got bored.

Thanks to Chris and Leslie in hiking HQ we received our first resupply box of food and essentials.  What a relief!  With it we retired to our cabin to shower and take a nap.

Later in the evening whilst waiting for a pizza, Micah and his parents walked into the restaurant.  He actually was barely walking.  Conrad called him Sheriff!  He had walked solid to complete the section in 2 days.  I thought that we were broken, but he showed us!  He had counted 803 blow-downs since Fish Lake!  His parents were there to take him home.  He was out.  I hope he enjoys some time away and maybe rejoins us at a later date.  I don’t blame him.  It is disheartening to see so many of the hikers we have befriended opt out so early on.

The last 10 days have been brutal.  I wasn’t expecting it to be easy, but I also wasn’t expecting this.  The combination of blow-downs, snow, and mosquitos have taken their toll.  We will rest tomorrow and plan our next section with a clear head.  Thanks to everyone so far for all your support.