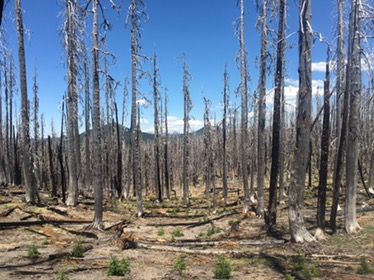 I slept much better last night because I just passed out from exhaustion!  The icy cold spring water made for a refreshing wake up ‘shower’.  Filtering water out here is a chore but it tastes great.  I also appreciated our camping spot more in the morning seeing as we hadn’t been eaten in the night.  It was idyllic.

We left camp with wet shoes that we had been unable to dry out after our snow escapades.  My butt was also causing me discomfort following a particularly invasive mosquito bite.  Since then I have now lost all self-respect as Conrad stands behind me whilst I pee to swat the little critters!

Although we hadn’t said it out loud at that point, we were both secretly hoping we could pull a miracle out of the bag and hike the 23 miles to the amenities of Crater Lake today.  After 4 miles we realised it wasn’t possible.  Along the way we met the first person we had seen in days – Dave the professional traveller.  He was relieved to see that we had found his foam sitting pad which he had left on a log a few miles up trail after leaving in a hurry due to the mozzies. He referred to them as ‘maddening’.  He did seem quite mad. 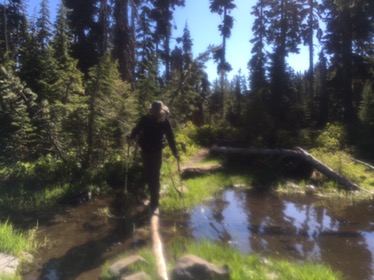 After the last possible place we filled up with 4 litres of water each.  This was to last us the next 16 miles, including an overnight camp.  We had to seriously ration.  Thanks to the heavy bags we had to stop and rest more often today.  Twice we took our shoes and off and put our feet in the snow to numb the pain.  Conrad is suffering from a nasty blister on his toe.  He even had the nerve to accuse me of secretly filling his bag with firewood as it felt heavier every time he put it back on!

I’ll be honest here – today was not very enjoyable.  We didn’t stop often to admire the scenery and take lots of photos.  We were purely trying to clock off the miles.  Spirits were low. 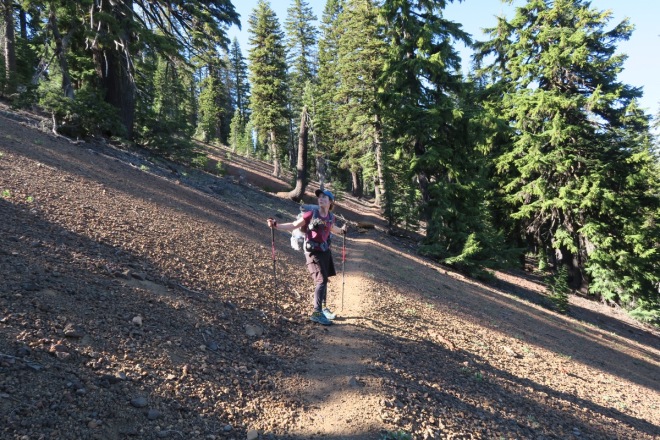 The trail kept taking us from damp forest areas with lingering snow mounds, where mosquitos were rampant, into dry arid areas.  In these places long stretches of older forest fires meant we couldn’t escape from the sun.  Today’s burn zone showed new grow pines spurting up.  In the Oregon desert we caught our first glimpse of Crater Lake’s famous rim peaks still sprinkled in snow.  It looked far away as we were zoning out daydreaming about ice-cold fizzy drinks and real food.

After another day of 11 hours on the trail we reached a flat enough area to camp on Goose Egg ridge.  Only after setting up the tent did we notice all the scattered animal bones nearby.  Those mountain lions had better stay away – I’m in no mood to be messed with!  I started cooking a dehydrated pasta meal only to discover our gas canister ran out before the water could boil.  At this point I wanted to cry.  We really could have done with a hot meal.  Instead we ate some jerky and another snack bar.  We both can’t wait to reach Mazama Village tomorrow for food and a shower.  Looks like Conrad is going to have to deal with me without my morning coffee!