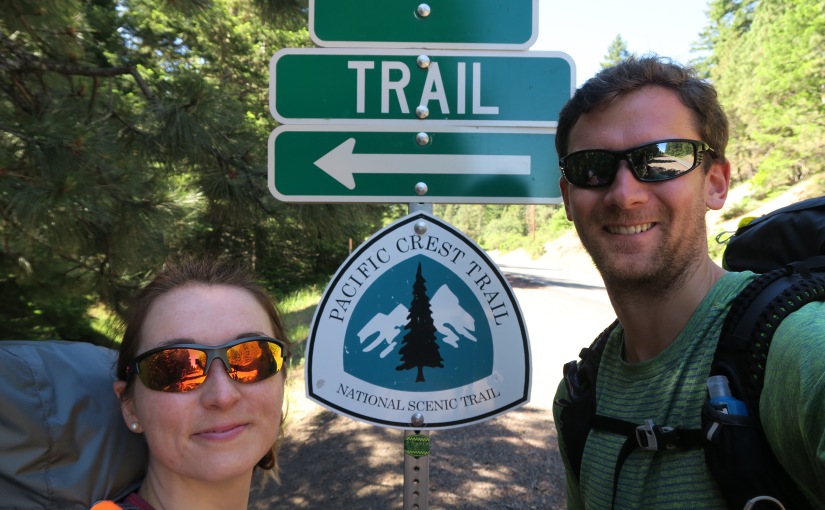 The day finally arrived to be let loose into the wild.  I felt a strange sense of calm – probably denial – in the cab ride to the start point.  That calm was swiftly quashed as the cab driver informed us about 2 packs of wolves now living in the vicinity. Thanks a lot! I now have the addition of wolves on my ‘things to be scared shitless of list’!

We had breakfast on the terrace at Callahan’s, a PCT haunt by interstate 5. It was a good ‘last meal’, but annoyingly we didn’t realise it was over a mile to the trail junction from there so we added a hot road walk with full packs to arrive at our official start.  The packs feel heavy.  Really heavy! In the [limited] training we did we never carried this sort of weight. It makes walking very taxing.

The first few miles took us through damp pine forest, broken occasionally with sunny meadows of long grass and wild flowers.  Whenever we saw open vistas they showed a sea of green as far as we could see.  The only exception standing out like a beacon was Mount Shasta, a pointed colossal volcano coated in show in the distance.  We could still hear the faint sound of the interstate, but it increasingly became muted by the birds.  Giant black and white butterflies hurried their wings. 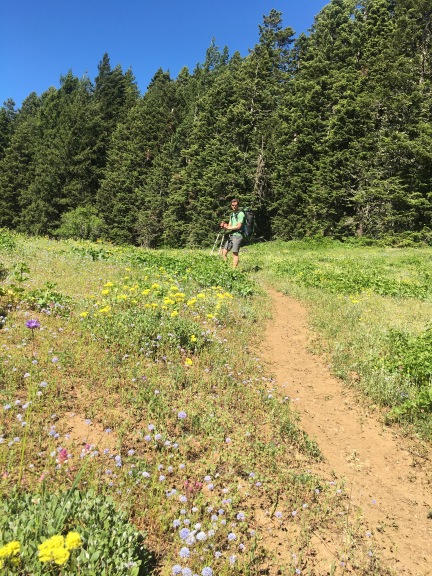 Finally about 4 miles in we met another soul.  So good to know we are not alone out here!  Checkerboard Red, a solo hiker covered head to toe in this heat due to a skin issue, is flip-flopping his way up and down the PCT in an attempt to defy the weather.  I’m sure he will make it – he is averaging 30-mile days! Maybe we will met again when he turns around at some point, otherwise we are unlikely to catch him.  Shortly after we met a young female solo hiker. She had just started today too and was heading south to Etna before flipping back to Ashland and onto Sisters.  She wore an impressive-sized knife on her chest that signalled not to mess with her.  I wish her a safe trip.  She is very brave.

More people joined us when we finally reached a water source 10 miles in.  Ken came and sat with us, having started at the same point as us today on his hike of Oregon.  Whilst we were airing our feet out he started cooking like a seasoned camping pro.  The amount of food he is carrying is astonishing.  Also joining us was a couple of older local guys who have been hiking 50-100 mile sections of Oregon over the last 10 years.  They complete it tomorrow and promised to be celebrating with beers by this time!  Inspiring.  I was relived when they informed us that bears are not a problem in this mountain range, but I’m not going to take their word for it!

We made camp 2 miles later at the next water spring hidden in a meadow.  We were greeted by Maya, a very excited retriever dog.  She carries all her own supplies whilst hiking with her owner Brandon from Tennessee.  What a companion.  Hopefully she will deter any bears too.

We were jealous about some of Brandon’s set up.  Chatting to him we found out he likes the camping aspect more than hiking (the opposite to us), and carries the most ridiculously heavy pack imaginable.  We could probably learn a lot from him as it took us 2 attempts to get the tent up due to an inside out rain sheet.  Ops. 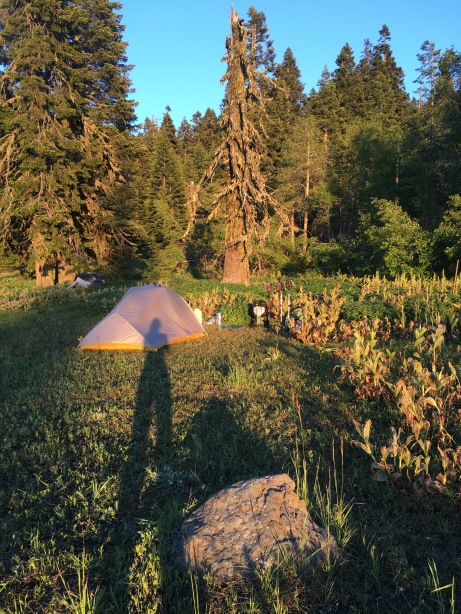 It remained sunny and warm until 20:30, shortly before which another solo hiker joined our meadow campsite.  Micah is on his way up to Cascade Locks and will probably arrive there before we have even left Crater lake!  So our little community complete, we enjoyed a campfire together under a starry sky.

On a side note, I couldn’t help noticing that everyone we met today have bigger packs than us! Maybe that is a good thing – I certainly don’t think I could carry much more weight – but it also makes me question whether we have enough supplies or they all know something that we don’t?  Only time will tell.