Today we experienced our first taste of the PCT thanks to the recommendation of a Tahoe Park Ranger. Joining at Lower Echo Lake the trail is partnered with the Tahoe Rim Trail running north.

First thing we noticed on hitting the trail was the impact of high altitude (>7000ft). The gradual climb up the rocky lake path that skirts around Echo Lakes felt a lot harder than it should have. The sun was strong yet the mountain air was crisp with winds suddenly whipping up a frenzy, and then dying in an instant. I nearly lost my hat on numerous occasions, another reminder that Conrad’s more practical but lame-looking hat is very more fit for purpose!

I wondered who owns the little lake houses and cabins dotted around both Echo lakes, looking down on them from our vantage point in envy. I’d like a lake house. With a boat.

We passed a healthy number of fellow hikers of all age groups and chatted with many. My personal favourite was Tipsy the dog who enjoyed a fabulous view from the comfort of her owners padded sling! Well she wouldn’t want to get her paws cold. And cold they would have gotten as around four miles in snow had taken over the trail.

The novelty of the snow wore off after around twenty minutes of onerous trudging. The snow is in rapid melt down to clear the peaks for summer, but it was still icy so we were sliding around all over the place. At one point we lost sight of the tracks we had been following since the trail became buried and had to consult the GPS. Luckily not far off track! Phew.

Two wet feet and what felt like an eternity later we decided to make a tactical stop for lunch overlooking Lucille lake to reassess. Lunch was a disappointing couple of bagels with cream cheese (slim pickings at the Camp Richardson General Store), but the view we ate with was priceless. Not a single soul passed us by as we sat on our little rock, surrounded in a sea of white.

An executive decision was reached to turn back less than a mile from Aloha Lake. I hate not making a target, but the snow was really hampering things, and the last thing we needed was an injury so close to our big hike. We had taken nearly an hour to walk the last mile, and it would await us again as soon as we turned around.

The return journey was much quieter, and in some respects we got to enjoy the stunning lake views even more. 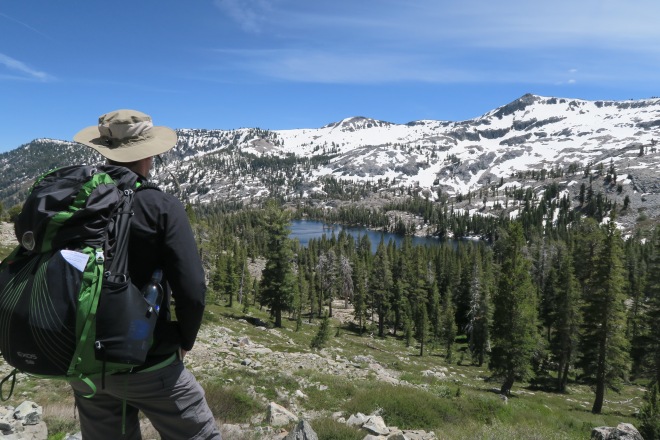 Six hours later and we were back at the trailhead. Next stop burgers, followed by Cold Stone Creamery – we’re carb-loading after all!